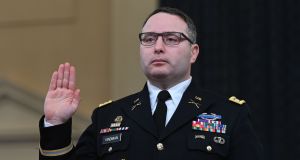 Lt Col Alexander Vindman, who defied Donald Trump to deliver public testimony during the president’s impeachment inquiry, was removed from his White House post on Friday.

Vindman, a Ukraine expert on the national security council, had been scheduled to rotate out of his White House assignment this summer, but he was suddenly fired and escorted out of the building, a lawyer’s statement said.

His firing was the latest in a string of moves by Trump against his perceived antagonists from the impeachment inquiry.

Lawyer David Pressman said: “He followed orders, he obeyed his oath, and he served his country. And for that, the most powerful man in the world - buoyed by the silent, the pliable, and the complicit - has decided to exact revenge.

“There is no question in the mind of any American why this man’s job is over, why this country now has one less soldier serving it at the White House. LTC Vindman was asked to leave for telling the truth.”

An hour after Trump’s acquittal, Senate Republicans announced an investigation of Hunter Biden, whose former employment with a Ukrainian gas company Trump has made the centerpiece of a political attack on his father, Joe Biden, the former vice-president.

Trump and his son Donald Trump Jr have also repeatedly attacked Mitt Romney of Utah in the past week, the only Republican senator to vote to convict Trump on abuse of power. Romney voted to acquit Trump on obstruction of justice.

Central to the House impeachment managers’ argument for Trump’s removal was a warning that if he faced no retribution for his misconduct, Trump would expand the pace and scope of his power abuses.

Most of the dozen witnesses who testified in public impeachment hearings had already left their posts in the Trump administration before testifying. But Vindman continued to work in the White House after he testified about internal White House shock at Trump’s Ukraine scheme.

A line from Vindman’s testimony about the supposed strength of the rule of law in the United States - “here, right matters” - became a refrain in the prosecution of Trump at the Senate impeachment trial, which ended on Wednesday.

Lead impeachment manager Adam Schiff urged the senators to reflect on Vindman’s words as they weighed the charges against Trump.

Trump was acquitted on both articles of impeachment on a party-line vote, with the exception of Romney’s vote to convict on abuse of power.

In the opening statement that Vindman gave when testifying to the House of Representatives last October, Vindman outlined how he planned to describe his concerns that the president’s plot to weaken rival Biden by strong-arming the Ukrainian government into investigating him was undermining US foreign policy in Ukraine.

Vindman’s testimony was a dramatic moment in the inquiry. At one point he delivered a message to his father, who fled the former Soviet Union with the family to settle in New York.

“Dad, my sitting here today, in the US Capitol talking to our elected officials is proof that you made the right decision 40 years ago to leave the Soviet Union and come here to the United States of America in search of a better life for our family,” he said.

“Do not worry. I will be fine for telling the truth.”

Why do you have the confidence to “tell your dad not to worry?” Representative Sean Maloney asked Vindman.

“Congressman, because this is America,” he replied, without hesitating. “This is the country I have served and defended, that all of my brothers have served. And here, right matters.”