Democrats split over Sanders, Buttigieg, Klobuchar and Bloomberg as nominees 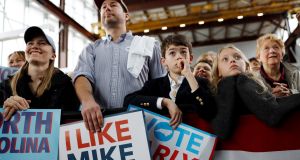 Donald Trump’s re-election campaign raised more than $60 million (€55 million) last month, a sign of the financial power behind the US president as he prepares to contest November’s election.

Mr Trump’s re-election campaign now has more than $200 million cash on hand, having raised more than $525 million since the beginning of 2019. Campaign manager Brad Parscale said Mr Trump’s impeachment had given a boost to fundraising.

He said that, since September, when the impeachment inquiry against Mr Trump had been opened by House of Representatives speaker Nancy Pelosi, the president’s re-election campaign had gained more than a million new donors.

His comments came as Democrats remain divided about who to nominate as their candidate to take on Mr Trump in November.

Mr Buttigieg, who faces a tough battle in the next states that hold their primaries and caucuses, is deploying an extra 60 staff in the states that vote on Super Tuesday, March 3rd. He also received a boost from a veterans’ “super-pac” – a large fundraising committee – that has backed an ad campaign in Nevada, the next state to hold its selection process in just over a week’s time.

Amy Klobuchar, who flew to New York for a fundraiser after the New Hampshire primary where she finished a strong third, is also focusing on Nevada, intensifying ad campaigns in the state.

This week former New York mayor Mike Bloomberg received several endorsements from prominent members of Congress – a sign that his strategy of skipping the early voting states and instead contesting the states that vote on Super Tuesday may be working.

Three African-American members of congress, Gregory Meeks, Lucy McBath and Stacey Plaskett, backed the 77-year-old billionaire – important endorsements as he faces scrutiny of his stop-and-frisk policy while he was mayor of New York, which disproportionately targeted young black men.

Mr Bloomberg is expected to spend up to $1 billion of his personal fortune before November as he seeks to become the candidate on the Democratic ticket to oppose his fellow New Yorker, Mr Trump.

In his latest Twitter attack on Mr Bloomberg, Mr Trump dismissed his possible rival on Thursday, mocking his stature. “Mini Mike is a 5’4” mass of dead energy who does not want to be on the debate stage with these professional politicians. No boxes please,” he tweeted, referring to a conspiracy theory that the former mayor will demand that he stands on a box on the Democratic debate stage. “He hates Crazy Bernie and will, with enough money, possibly stop him,” he added, referring to Mr Sanders. “Bernie’s people will go nuts!”

Mr Trump is refreshing some of his own White House personnel, more than a week after his impeachment trial ended in acquittal. Hope Hicks, his former aide who was centrally involved in his 2016 campaign but who left the White House two years ago, is to return to the White House, it was confirmed on Thursday. The 31 year old has been working in a communications role for Fox News since leaving the Trump administration in 2018.

Mr Trump hit out at another former member of staff, retired marine John Kelly who served as his chief of staff for more than a year before he was replaced by former South Carolina congressman Mick Mulvaney. Mr Kelly this week criticised Mr Trump’s decision to fire Lieut Col Alexander Vindman, a National Security Council employee who testified during the impeachment inquiry into Mr Trump.

Mr Kelly told an audience in New Jersey that Mr Vindman “did exactly what we teach them to do”, by following a subpoena to testify before the committees.

“When I terminated John Kelly, which I couldn’t do fast enough, he knew full well that he was way over his head,” he wrote.