The race to take on Donald Trump just got interesting

Pete Buttigieg triumphed in the Iowa caucuses, but Trump was the real winner this week 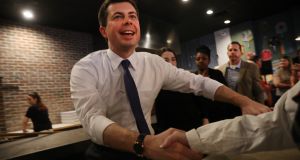 It’s billed as the first big set piece of the United States’ presidential election every four years. Since the mid-1970s, Iowa has played an outsized role in the presidential candidate selection process. After Democrats changed the rules to shift the power away from party leadership, Iowa moved its caucus to become the first in the nation.

A relatively unknown former governor from Georgia, Jimmy Carter, spied an opportunity. Though seen as a long-shot in a then crowded Democratic field, Carter threw his efforts into Iowa, campaigning intensely in the rural midwest state, where his folksy persona resonated with voters. Carter ultimately became the party’s nominee and president, correctly guessing that the media exposure he would gain in Iowa could propel his campaign.

Since then, Iowa has helped launch unlikely candidacies – Barack Obama delivered one of his most famous speeches in Iowa on caucus night 2008 after defeating front runner Hillary Clinton.

But the state’s first-in-the-nation status may be under threat, after a series of mishaps and delays plunged this year’s selection process into chaos.

On Monday, thousands of registered Democrats gathered at schools, church halls and even homes across the state to cast their votes.

At Morris Elementary School just south of the capital, Des Moines, 240 local residents arrived just before 7pm to select their preferred nominee. Young couples carrying toddlers, harried workers and retirees all filed into the school gym to partake in one of the US’s most unique acts of political participation.

Unlike other selection processes, voters make their choice in public, choosing to stand beside signs designating specific candidates. Even before the quorum was called, it was clear at this caucus site that Bernie Sanders would top the poll as a garrulous group of mostly young Bernie supporters gathered beneath the sign.

As the first round of results was announced only Sanders, Joe Biden and Pete Buttigieg reached the 15 per cent threshold needed to secure delegates, prompting a second round of horse-trading as each camp tried to persuade voters whose first choice didn’t make the cut to join them.

In the end Buttigieg’s camp secured the highest number of transfers – including a big chunk of Elizabeth Warren supporters – a pattern that was later shown to be replicated across the state.

But within a few hours, this symbol of small-town charm and direct democracy had become instead the focus of widespread disdain.

Precinct captains trying to communicate results from almost 1,700 sites across the state reported difficulties with the app that had been specifically designed to transmit the caucus information. A special hotline was flooded with callers.

Democratic officials told reporters they believed Trump supporters had called in to the hotline after its number was publicly published, clogging the lines

The results that were supposed to be called late on Monday were instead released in batches throughout the week.

But by then, the damage was done. The integrity of the election process had been called into question. Democratic officials told reporters they believed Trump supporters had called in to the hotline after its number was publicly published, clogging the lines.

It emerged that the app at the centre of the controversy had been designed by an aptly-named company called “Shadow”, founded by former Hillary Clinton campaign staff.

The internet was awash with conspiracy theories after it emerged that Pete Buttigieg’s campaign had used the company for a text messaging service, but not for its caucus representatives. A New York Times report found the vote counts were riddled with significant, though unintentional, inconsistencies.

At a time of heightened concern about electoral interference in the US presidential election, the Iowa debacle has had worrying implications for public trust in the election process.

It also gave long-time critics of the Iowa caucuses new reasons to call for its abolition. The predominantly rural state with a population of 3.2 million has long been seen as too white and too unrepresentative of the US at large, and particularly the Democratic Party, which has become increasingly diverse in recent years.

Furthermore, the low turnout – fewer than 200,000 voters caucused on Monday – means that a tiny percentage of Americans have a disproportionate influence on who will be the party nominee, though proponents of the system argue that it is a rare opportunity for little-known candidates to have a shot at the presidential nomination through face-to-face canvassing.

While the Democratic party begins a long process of reflection on what’s next for the Iowa caucuses, the candidates in the race have already moved on. Many left Iowa on Monday night directly for New Hampshire, the next state to vote on Tuesday.

Though the impact of the Iowa caucuses was dampened as the results trickled out this week, there is no doubt that the Democratic race to take on Donald Trump just got interesting.

A relative political newcomer, Buttigieg is the youngest frontrunner candidate by far – 40 years younger than Sanders

The big winner from Iowa is Pete Buttigieg, finally declared the winnner on Thursday night with 26.2 per cent of the vote to Bernie Sanders’s 26.1 per cent.

A relative political newcomer, he is the youngest frontrunner candidate by far – 40 years younger than Sanders. The 38-year-old former mayor of South Bend, Indiana, would be the first openly gay presidential candidate if successful.

Since announcing his candidacy last April he has managed to tread two paths – attracting big financial support from east-coast liberals, particularly from the tech community, before tacking more towards the political centre as the campaign went on.

His experience as a veteran – he fought in Afghanistan – as well as his Christian faith, could help to win Republican voters in Trump-friendly districts. Significantly, most of his support in Iowa came from predominantly rural, more conservative counties where his team had a strong ground campaign since last year.

While Bernie Sanders won the highest share of first-preference votes, he finished a close second to Buttigieg in terms of delegates – the 41 representatives that Iowa sends to the Democratic National Convention in July.

Sanders’s impressive performance in Iowa was not unexpected; he narrowly lost the state to Hillary Clinton in 2016. He is also well positioned to perform strongly in New Hampshire on Tuesday. Like Elizabeth Warren he hails from a neighbouring state and has a well-resourced ground campaign.

But the Iowa caucus results also contain warning signs for Sanders. While the 78-year-old socialist won the popular vote, he did not attract as many second preferences, an indication that his appeal is limited to a group of diehard loyallists rather than a broad coalition. While this will not be an issue in the primary contests which allow only one round of voting, it could spell difficulties in a national election, when the Democratic nominee will need to appeal to as wide an electorate as possible.

Joe Biden’s poor performance was the other main talking point of the Iowa caucuses. The former vice-president and national front runner finished a distant fourth, just behind Warren, who may also be disappointed with her showing. While his campaign had been playing down expectations about Iowa and New Hampshire, his vote share was at the lower end of expectations.

Biden now faces a real challenge to keep his campaign momentum going. Though the former vice-president commands unrivalled support among African-Americans – a crucial constituency in later voting states such as South Carolina – younger voters are not warming to his message. At the Morris Elementary School caucus site, for example, not a single caucus-goer in the Biden camp was under 60 years of age, in contrast with the millennial-heavy Bernie Sanders corner of the room.

For Democrats, this week marked a less than auspicious start to the 2020 primary season, at a time when the party is desperate to remove Donald Trump from office in November.

The breakdown of the Iowa vote revealed the highly fragmented nature of the Democratic field – candidates in Iowa effectively split the vote, with many caucus-goers expressing no particular preference for any single candidate. That may benefit candidates such as Mike Bloomberg, who is skipping the Iowa and New Hampshire contests in order to benefit from what he hopes will be a split vote.

The real winner this week was Donald Trump. The caucus meltdown unfolded as the president was acquitted on the final day of his impeachment trial in the Senate and delivered a prime-time State of the Union address to Congress which at times seemed more like a political rally than a presidential address.

Republicans are hoping that Trump’s impeachment – which, unlike previous impeachment trials, took place in an election year – will energise his supporters. A key Republican talking-point during the impeachment trial was that Democrats were trying to remove a democratically-elected president who they simply didn’t like. This could chime well with Trump’s re-election strategy.

Donald Trump won the 2016 election in part by successfully stoking grievances and convincing millions of Americans that their worldview and values were not appreciated by the ruling political classes. His acquittal in the impeachment trial will help play into this narrative.

A Gallup poll this week showed that Trump’s approval rating has climbed to 49 per cent – his highest since taking office. For Democrats it should be a warning sign.

With the presidential election just nine months away, the party needs a more coherent strategy if it wants to win the White House on November 3rd.