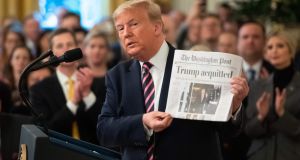 US president Donald Trump holds up a newspaper that displays a headline “Acquitted”. If a request for a foreign government to help sway an election is not deemed enough to remove him from office, what is? Photograph: Saul Loeb/AFP

And so it ended as expected. On Wednesday, President Donald Trump was found not guilty of two articles of impeachment by the US Senate.

The result was never in doubt. The high bar needed to reach the two-thirds majority for conviction – requiring 20 Republicans to cross the aisle and vote with the Democrats – meant Trump was always likely to remain in office.

Every Republican senator except one – Mitt Romney of Utah, who voted to convict Trump of abuse of power – opted to acquit the president over his dealings with Ukraine.

The outcome has raised questions about the Democrats’ handling of the process. Nancy Pelosi had resisted calls for impeachment from progressives in her party during the Mueller investigation, mindful of the impact the Clinton impeachment had on public support when Republicans, not the then president Bill Clinton, were punished by the public.

But the emergence of a phone call between Trump and the Ukrainian president in September, in which the US president pressurised Volodymyr Zelenskiy to investigate political rival, Joe Biden, crossed a line.

Pelosi moved decisively to order an impeachment inquiry. Whatever the ultimate outcome, she felt she had no choice – her constitutional role as the head of the legislative branch meant her duty was to keep a wayward president in check, whatever the political fallout.

Pelosi may have felt that history would prove her right, but it is unclear if many Americans see it that way. When asked about the wisdom of impeaching Trump, Pelosi repeatedly says that he has been impeached “forever”. This week Trump and his surrogates took that trope and spun it, touting the phrase “acquitted forever” – a view that is likely to dominate among Trump supporters.

A key difference between Trump’s trial and previous impeachments was that this one took place in an election year. Andrew Johnson, Clinton and even Richard Nixon – who jumped before he was pushed over the Watergate scandal – were all in their second terms when they faced impeachment.

A key dynamic of the Trump impeachment is that he may well be re-elected in November. The effect would be twofold. Trump’s re-election would be his ultimate vindication, further debasing the concept of impeachment as a tool to check presidential powers. It would also leave the president beginning a second term completely unrestrained, leaving open the question that if a request for a foreign government to help sway an election is not deemed enough to remove him from office, what is?

But despite the quandary facing Democrats following Trump’s acquittal, the outcome raises more questions for Republicans. This week confirmed the total takeover of the party by Donald Trump. The mercurial businessman who stunned the Republican establishment by running for the party’s nomination four years ago has made the party his own.

Almost all Republican senators backed the president, following a unanimous vote against impeachment by Republicans in the House of Representatives in December. Figures such as Senators Ted Cruz and Marco Rubio, vociferous opponents of Trump in the 2016 campaign, came into line, no doubt aware of the popularity of Trump in their home states.

Rubio’s assertion that the president’s actions may have been wrong, but didn’t merit removal, suggests he is leaving his options open for the time in a post-Trump world where the president’s actions may be judged more harshly. That the Republican party, which has long seen itself as tough on foreign policy, acquitted a president that tried to involve a foreign government in domestic politics for his own political gain, is a sign of how far the GOP has fallen from its self-professed standards.

The treatment of Mitt Romney is another case in point. Just eight years ago, Romney was the party’s presidential nominee. This week he became a pariah to many. The former Massachusetts governor delivered a speech in the Senate that may define his career, carefully setting out why his conscience, his god and his duty to family and history could not allow him to acquit the president on abuse of power charges.

Romney predicted that he would face “unimaginable consequences” for his decision. Within hours, a Twitter mob, led by Donald Trump jnr, was calling to #expelMitt from the party. The following morning, Trump mocked Romney’s religion at the National Prayer Breakfast.

As the US settles in for a rollercoaster nine months ahead of November’s presidential election, the outcome is still in doubt. What is certain is that Trumpism will be the form of Republicanism on the ballot on November 3rd.