America Letter: Fox News and CNN to have huge impact on election due to split audience 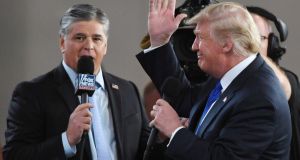 Fox News presenter Sean Hannity with his big fan US president Donald Trump: Links between Fox and the White House are clear as the impeachment trial gets under way. Photograph: Ethan Miller/Getty

As the United States prepares for a presidential election, the role of the media will be a crucial element of the campaign.

A new survey from the Pew Research Centre presents a timely insight into the intersection between politics and media. It underlines what has long been evident – the deep partisan divisions that characterise Americans’ choice of media outlets and how they drive the political divisions in this country of 300 million people.

“Republicans and Democrats place their trust in two nearly inverse news media environments,” the report asserts, describing the US as a “divided” nation.

“It would be hard to overstate its connection as a trusted go-to source of political news for Republicans,” the report notes of Fox News, stating that two-thirds of Republicans use the channel as a source, though a similar percentage of Democrats use CNN.

Further, the report finds that polarisation has increased since 2014, with Republicans in particular growing more alienated from established media sources. Democrats are generally more trustful of the media, expressing trust in a far greater number of news sources than Republicans.

How much of this diminution of trust is down to Donald Trump is unclear. The US president consistently attacks established media outlets, brandishing centrist and centre-left media outlets like the New York Times and CNN as fake news.

Since the appointment of a fourth White House press secretary, Stephanie Grisham, last year, the long tradition of daily White House press briefings has been abandoned. Instead, the president gives impromptu press points when he arrives and leaves the White House, or in the Oval Office – a system that allows him to control the process by choosing which questions to answer, but avoiding the need for a spokesperson to stand before a room of journalists and take tough questions on White House policy.

But it is Trump’s almost symbiotic relationship with Fox News that is the most unique aspect of his presidency. The president regularly retweets comments by star presenters like Sean Hannity. The breakfast show Fox & Friends is a favourite, with the president often live-tweeting about segments from the White House.

He keeps a close eye on any dissenters too – unhappy with an interview conducted by Martha MacCallum with a Democratic congressman in July, he expressed his displeasure with the host’s “endless softball questions”. “Fox sure ain’t what it used to be,” he tweeted. “Too bad! Oh well, we still have the great @seanhannity who I hear has a really strong show tonight.”

The notion that the president can sway his 70 million Twitter followers about the merits of a news host or channel has implications for media companies’ bottom line, as advertisers choose where to spend their cash, as much as the political independence of the journalism.

The decision by Fox to bat aggressively for Trump – with rare exceptions – has paid off. Profit has remained robust at Fox News since its spin-off from 20th Century Fox last year.

The close connections between Fox and the White House were also evident this week as Trump’s impeachment trial got under way. According to Media Matters for America, a non-profit monitoring body, members of Congress and the legal team representing Trump have been on Fox News thousands of times. These include lawyers like Jay Sekulow, Alan Dershowitz and Pam Bondi, who are defending the president in the Senate trial.

The suggestions in the Pew report that Fox News is tightening its hold on Republican voters is good news for Trump as he heads into the election campaign. All signs are that the president will double down on his 2016 “us versus them” narrative, a tactic that will be helped by an even more tribal media landscape.

Democrats, in contrast, will not have the same level of media alignment to help bolster their candidate – at least not until the nominee is chosen at July’s convention.

The decision by the New York Times editorial board this week to endorse two candidates – Senators Amy Klobuchar and Elizabeth Warren – illustrates the challenges for media outlets to pick a stand-out candidate in a crowded field.

All this will benefit Trump, who can count on Fox News to relay his political message. As the president enters campaign mode, it’s a valuable tool.

1 Over 2,000 buyers bid for first affordable homes planned for south Dublin in years
2 Storm Dennis washes abandoned ‘ghost ship’ onto rocks off Co Cork
3 Forget a grand coalition – here is what the next government will most likely look like
4 Caroline Flack death: Public disquiet over media conduct grows
5 Fine Gael faces internal resistance to a grand coalition with FF and Greens
Real news has value SUBSCRIBE