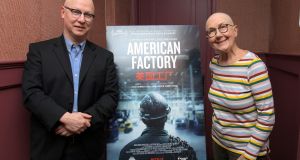 Established in 1825 as a utopian community and today still known for its laidback vibe, the town of Yellow Springs, Ohio, is a progressive outpost surrounded by unerringly Republican-leaning farmland.

“We’re definitely a blue dot in a sea of red,” says Brian Housh, president of the Yellow Springs village council, of the community’s broadly liberal worldview. Of the 1,100 or so votes cast here in the 2016 presidential election, only 61 were for Donald Trump.

This week, the town’s 3,700 residents are giddy with expectation and pride ahead of Sunday night’s Academy Awards ceremony in Los Angeles, where local film-makers Julia Reichert and Steven Bognar are nominated for an Oscar for their 2019 documentary American Factory.

Produced by Netflix and distributed by Barack and Michelle Obama’s Higher Ground Productions company, American Factory centres on the first years of Fuyao Glass America, a Chinese-owned and -run auto glass company which in 2016 opened on the site of a former General Motors auto factory.

The company employs more than 2,000 people at its plant in Moraine, a half-hour drive southwest of Reichert and Bognar’s hometown. The film is an in-depth look at the challenging work culture and day-to-day struggles Fuyao’s blue-collar American workers face under foreign ownership.

Both the success and content of American Factory are stirring political emotions in Yellow Springs.

“My uncle lost his job at GM [when the Moraine plant closed in 2008],” says Housh, who grew up not far from the Fuyao plant. In contrast to Moraine and its neighbouring districts, areas that are home to predominantly white, “very conservative” communities, Housh finds Yellow Springs, where he lives having returned from 12 years in Thailand, to be a place of tolerance. “You’ve got this amazing energy; on a nice day you’ll see 5,000 people coming into town just to see what’s going on.”

The street benches of the picturesque town of 3,700 are decorated with colourful mosaics, and art features (and the odd Bernie Sanders poster) can be found all over town. A sign bearing the word “kindness” is draped across a street at the town’s northern end. Dotted around Yellow Springs are more than 100 non-profit organisations. The village manager, Josue Salmeron, is from El Salvador, having fled conflict there as a child.

The town has one of the only medical marijuana growing facilities in the region. In March, locals will vote to decide whether to reduce the voting age from 18 to 16 and, separately, allow non-citizens vote in local affairs. Yellow Springs’s renewable energy infrastructure and planning make it a regional leader in that field. “We definitely think of ourselves as influencers and having an ability to be a model for our region,” says Housh.

Yellow Springs feels a world apart from the communities that surround it. In a neighbouring district a five-minute drive out of town, 70 per cent of voters chose Donald Trump to be their president in 2016. Along the winding roads outside Yellow Springs, car stickers and lawn signs bearing the Trump slogan “Keep America Great” are common.

Yellow Springs is wealthier and boasts better-rated schools than the districts surrounding it. The median house price in the town is about $248,000 (about €226,000), while for Greene County, of which Yellow Springs is part, it’s $182,000, according to Zillow. com, a property website.

The yet-to-be-fulfilled promise of bringing back thousands of lost farming and manufacturing jobs to America’s corn country and rust belt helped propel Trump to the White House four years ago.

It is the declining economic fortunes of blue collar workers that American Factory subtly unpicks throughout its one hour and 55 minutes running time. It depicts the unsettling reality facing line workers who, having previously earned a comfortable living assembling cars when employed by GM, now find themselves back at the factory under Chinese ownership.

They struggle to come to terms with the fact they’re earning a fraction of what GM paid them in the past whilst dealing with a borderline hostile working environment.

All the while, the Trump presidency remains an abhorrence for many in the film-makers’ hometown. “Pretty much anyone you grab and talk to in Yellow Springs is frustrated by the fact that Ohio is buying into the [Make America Great Again] mentality,” says Housh.

These days, even the idea that Ohio claims to be a swing state is hotly debated. About two-thirds of the seats in the state legislature are occupied by Republicans. In the 2016 presidential election Ohio was more than 10 per cent more Republican than the rest of the country – the furthest it’s shifted from the national average since 1932.

With the Democratic Party’s caucuses and primary season in full swing this month, Bernie Sanders and Elizabeth Warren are the most talked about names in Yellow Springs, says retired engineer David Turner. “There’s also the ‘oh, Biden is evil because he’s part of the establishment’ attitude.”

For Turner, who has lived in Yellow Springs for decades, the Democrat-Republican divide can only be healed by Americans moving away from the identity politics and tribalism that’s surged in recent years. “The people we [liberals] have to communicate with are five or 10 minutes in any direction from here,” he says, referring to the Trump-voting farming communities that surround Yellow Springs.

The problem for progressives, as he sees it, is that telling Republicans they’re wrong for supporting politicians like Trump will get them nowhere.

Bookmakers have installed American Factory as favourite to win the best documentary feature category on Sunday. The optimism is matched on the streets of Yellow Springs, where flower store owners say there’s been a rush in floral deliveries from well-wishers keen to offer their congratulations to Reichert and Bognor.

“They are so fair in presenting both sides of the story,” says Jenny Cowperthwaite, executive director of the town’s sole cinema, the Little Art Theatre, of the film-makers’ documentary skills.

On Sunday, the 122-seater cinema will host an Oscar party where locals can come watch the Academy Awards live-streamed. “This year,” says Cowperthwaite, “it’s going to be a full house.”