Trump takes care to keep evangelicals on board

America Letter: Amid tensions with Iran, the US president moves to mobilise key support 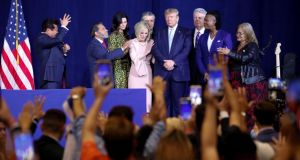 In the 24 hours after news emerged that the United States had killed top Iranian commander Qassem Suleimani in a drone strike, President Donald Trump had only one official engagement on his agenda.

On January 3rd, as the world absorbed the implications of one of the riskiest decisions of his presidency, Trump headed to a meeting of evangelical supporters in Miami.

The “Evangelicals for Trump” event had been scheduled in December, and despite the momentous events of the previous 24 hours there was no suggestion that it would be cancelled. Instead, after a passing reference to events in Baghdad, Trump threw himself into an account of his conservative accomplishments in office, from protecting the lives of the unborn to efforts to allow prayer in public schools.

At the opening of the event he was joined on stage by faith leaders, who prayed over the 45th president of the United States. Eyes closed, clasping hands, they stood protectively around Trump.

Trump’s popularity with the evangelical Christian base has been one of the most surprising aspects of his political rise. That the thrice-married businessman, who has boasted of assaulting women, has retained support from the Christian community is puzzling to Trump’s detractors.

The moral justification often used by evangelical supporters was on full display at the Miami event. “I thank you Lord that he doesn’t claim to be perfect, but he is passionate,” said one pastor, encapsulating the simple ‘We know he has faults, but. . .’ logic embraced by Trump supporters across the land.

But the real explanation is more pragmatic. Trump has followed through on his election promise to appoint hundreds of conservative judges, most of whom are anti-abortion – a huge priority for evangelical supporters. At the Miami event, Trump was joined on stage by a young woman who had become pregnant at college but had chosen not to have an abortion.

Like many hegemonic displays of power and idolatry, Trump’s Miami event in fact masked an underlying unease. The event was hastily announced after a scathing editorial by the influential evangelical magazine Christianity Today, which called for Trump’s removal from office following his impeachment.

The magazine, which was founded by renowned evangelical preacher Billy Graham in 1956, said that Trump’s actions were “not only a violation of the constitution”, but were “profoundly immoral”.

It also said Trump had “dumbed down the idea of morality in his administration”, had admitted to immoral actions in business and in relationships with women, while his Twitter feed “is a near perfect example of a human being who is morally lost and confused”.

The response from the Trump team was swift and targeted. Within hours Trump himself was directing his 60 million Twitter followers to an article on right-wing website Breitbart News highlighting comments by Franklin Graham, one of the late preacher’s children, that his father had voted for Trump. Cissie Graham Lynch, a granddaughter of Billy Graham, agreed to join Trump on stage in Miami.

Trump denigrated the publication on Twitter as a “far-left magazine . . . which has been doing very poorly”, and would “rather have a Radical Left nonbeliever, who wants to take your religion & your guns, than Donald Trump as your President”.

“No President has done more for the Evangelical community, and it’s not even close,” he declared.

How far the controversy has impacted on Trump’s evangelical support base remains to be seen. But the Christianity Today editorial evidently served as a wake-up call for the Trump campaign.

The president launched an “Evangelicals for Trump” coalition at the Miami event, which will “spearhead evangelical outreach and engagement efforts nationally ahead of November’s election”.

With Trump’s job approval ratings above 70 per cent among white evangelicals, it remains an important base. The recent controversy may be just the thing to keep those voters motivated and ensure they get to the polls in November.