How has digital era led women to have sex with people who don’t appeal to them? 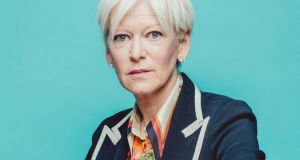 Joanna Coles, chief content officer of Hearst and the former editor of Cosmopolitan and Marie Claire: “There’s nothing empowering about being blackout drunk. Who wants to wake up the next morning in bed unable to remember what you did?” Photograph: Bryan Derballa/New York Times

I’ve noticed a weird pattern, in fiction and life, about sexual encounters: women decide they’re not attracted to a guy they’re nestling with. Limerence is not in the cards. But they go ahead and have sex anyhow. First, we have college student Margot in the New Yorker’s much-discussed short fictional story Cat Person who recoils as she watches Robert undress. “But the thought of what it would take to stop what she had set in motion was overwhelming; it would require an amount of tact and gentleness that she felt was impossible to summon.” Margot doesn’t want to seem spoiled or capricious, so she takes a sip of whiskey to “bludgeon her resistance into submission”.

Then we have the 23-year-old Brooklyn-based photographer who hooked up with comedian Aziz Ansari at his Tribeca apartment and talked about it anonymously to the website Babe. She was distressed by his arbitrary choice of white wine at dinner, his rush to sex, the way he jammed two fingers in a V-shape down her throat.

But at his request, she gave him oral sex twice; he briefly performed it on her once. On 60 Minutes, Stormy Daniels told Anderson Cooper that she was not at all attracted to Donald Trump but she had sex with him (without a condom). She said that she thought maybe “I had it coming for making a bad decision for going to someone’s room alone.”

After Cat Person became a phenomenon on the perils of romance in the digital age, its 36-year-old author, Kristen Roupenian, told the New Yorker that Margot succumbing “speaks to the way that many women, especially young women, move through the world: not making people angry, taking responsibility for other people’s emotions, working extremely hard to keep everyone around them happy. It’s reflexive and self-protective, and it’s also exhausting.”

So you’d rather have bad sex with someone who doesn’t appeal to you than find a way to extricate yourself? You can Lean In but you can’t Walk Out? I call Joanna Coles, the chief content officer of Hearst magazines and the former editrix of Cosmopolitan and Marie Claire. The 55-year-old Brit has a new book called Love Rules, a guide to avoiding the digital sand traps in relationships.

“Getting naked and having sex with strangers is hard,” she tells me. “We portray it as fun and we pretend it’s fun. But people crave intimacy, which is not easy to create in a hook-up. That’s why Britain just appointed a loneliness minister.”

The inspiration for Coles’ book was a conversation she had with Sally, the daughter of a friend. Sally described her weekends at a liberal arts college this way: “My friends and I all go out on Friday nights, get drunk and hook up. And on Saturday morning, we go down to the health centre together to get Plan B.”

My friends and I all go out on Friday nights, get drunk and hook up. And on Saturday morning, we go down to the health centre together to get Plan B

Citing a study calculating that half of all sexual assaults involve alcohol, Coles asks: if hooking up is so much fun for young women, why do they need to be insensate to do it? Leah Fessler wrote a popular piece in Quartz in 2016 about her disillusionment with the hook-up culture at Middlebury College. No one wants to go back to sock hops and going steady, she said, but “to attempt to separate emotions from sex is not only illogical, given that emotion intensely augments pleasure, but also impossible for almost all women”.

In her book, Coles quotes cyberpsychologist Mary Aiken on the dangers of losing your inhibitions more easily when you are in the “immersive environment” of cyberspace – a space designed by men. “Online dating is very crowded,” Aiken said. “There are four people in it: two real, normal selves, and two virtual selves.” Echoing a theme from Cat Person, Coles tells me: “Things go from naught to 60 really fast. When you have a lot of communication online before you go out with someone, it builds up a false sense of who the person is. There’s a tendency to fill in the blanks with positive information.” (She points to a study showing a sixfold increase in sexual assault associated with online dating.)

“Good sex is a wonderful high,” Coles says. “It’s what great novels and great music are about. And it’s free! But we’ve lost track of what a brilliant thing it is. It’s so transactional now, it’s bleak.” – New York Times