US president says he does not know about $130,000 payment by lawyer to Stormy Daniels

US President Donald Trump breaking his silence on Stormy Daniels Thursday, saying he did not know about a $130,000 payment made by his lawyer to the adult film star to keep her quiet about a sexual encounter she says she had with Trump. 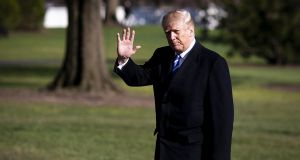 US president Donald Trump: 70 per cent of white evangelicals approve of his job performance, according to a CBS News poll. Photograph: Bloomberg

Evangelical leaders are planning a meeting with Donald Trump in June following continuing developments in the scandal over his alleged affair with pornographic actor Stormy Daniels, it was reported on Friday.

Four anonymous sources told radio network NPR that the meeting was intended to address concerns about how the midterms might be affected both by the president’s divisive leadership style and his alleged sex scandals.

As well as the claims by Ms Daniels – real name Stephanie Clifford – former Playboy model Karen McDougal has claimed an affair with Mr Trump. The president on Thursday denied knowing about a $130,000 payment his lawyer, Michael Cohen, made to Ms Daniels to buy her silence.

Early polling suggests Ms Daniels’s claim she had an affair with Mr Trump before he was president has not had a substantial impact on white evangelicals’ attitudes towards Mr Trump.

A CBS News poll held from March 8-11th found 70 per cent of white evangelicals approve of Mr Trump’s job performance. This poll was taken before Ms Daniels detailed her sexual encounter with the president on the television news programme 60 Minutes.

The poll looks exclusively at white evangelicals, omitting an increasingly powerful and diverse bloc within the community. Evangelicals are becoming more diverse, fuelled largely by an increase in young Latino members. This has led to an increasing political divide in the bloc, as these younger, non-white members are more often Democrats or independents.

Five months before the election, Mr Trump met privately with nearly 1,000 conservatives, predominantly members of the religious right, at a day-long conference in New York. The meeting was intended to brief Mr Trump on their policy positions and also bolster support for Mr Trump among more religious Republicans. The proposed meeting in June would have similar intentions, the sources told NPR.

Ralph Reed, chairman of the conservative Faith and Freedom Coalition, told NPR he does not expect the affair allegations to substantially reduce evangelical support for Mr Trump in the midterms. “If these folks don’t turn out in record numbers in 2018,” Mr Reed said. “It’s gonna be a long night for Republicans.” – Guardian