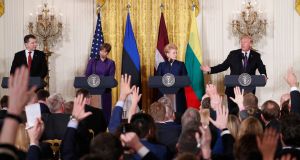 US president Donald Trump with (from left) President Raimonds Vejonis of Latvia, President Kersti Kaljulaid of Estonia and President Dalia Grybauskaite of Lithuania during a joint press conference at the White House in Washington on Wednesday. Photograph: Shawn Thew/EPA

Areas of the Baltic Sea and its airspace were closed on Wednesday due to planned Russian missile tests, the day after three leaders from the region sought reassurance over their security from US president Donald Trump.

Latvia shut down part of its airspace and Sweden started re-routing some flights and warned ships to avoid stretches of the Baltic Sea during Russian live-fire drills that are expected to continue until Friday.

The exercises have caused particular concern because they were announced by Moscow only last Thursday, and are set to take place just outside Latvia’s territorial waters and unusually close to a Swedish naval base at Karlskrona.

“It is a demonstration of force,” Latvia’s prime minister Maris Kucinskis told Reuters. “It is hard to comprehend that it can happen so close to [our] country.”

Latvia’s defence ministry summoned Russia’s military attache to Riga to express disquiet over drills that will be conducted inside the Baltic state’s exclusive maritime economic zone, and to request more information on what they would involve.

On Tuesday, Latvian president Raimonds Vejonis, Estonian president Kersti Kaljulaid and their Lithuanian counterpart Dalia Grybauskaite visited the White House for a summit to mark 100 years since the three states secured independence after the first World War – a period that would last until Soviet occupation in 1940.

“For your citizens, we are there for you. As we begin the next 100 years of our partnership, the Baltic republics can trust the United States will remain a strong and proud and loyal friend and ally,” Mr Trump told the visiting leaders.

While insisting that “nobody has been tougher on Russia than Donald Trump”, the US president also said it was “a real possibility that I could have a good relationship” with Russian president Vladimir Putin. “Getting along with Russia is a good thing,” he said.

“I think I could have a very good relationship with Russia and with president Putin, and if I did, that would be a great thing. And there’s also a great possibility that that won’t happen. Who knows?”

Mr Trump praised the Baltic states for pledging this year to meet a Nato target for military spending of 2 per cent of gross domestic product, and he pledged US funding to help them with training and equipment and the purchase of large-calibre ammunition.

The Baltic states want US troops to be on permanent rotation through the region and for western help to strengthen their air defences.

“We trust that our [US] partner and ally is investing seriously in the future of our defence – not only our region’s, but Nato’s territorial defence and in the peace and security of the world as it was before,” Mr Grybauskaite said.