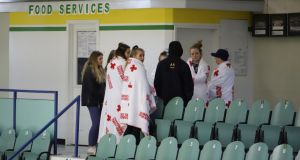 Mourners gather amid the empty seats of the Humboldt Uniplex ice-skating rink on Saturday after 15 people travelling on the Humboldt Broncos’ team bus died in a crash. Photograph: Kymber Rae/AFP/Getty Images.

People flooded the sports and social complex in the small Canadian town of Humboldt on Saturday.

They were seeking solace after learning the devastating news that much of the squad of its beloved junior hockey team had been killed, and many others wounded, in a terrible motorway crash the day before.

Fifteen people died when a bus carrying the team, the Humboldt Broncos, to a Saskatchewan Junior Hockey League playoff game collided with a tractor-trailer near Tisdale late Friday afternoon. The other 14 people aboard were injured. The team’s head coach, Darcy Haugan, was among the dead.

Authorities released no details of the collision, but said an investigation into the cause was continuing. The driver of the tractor-trailer was not injured, police said.

“The worst nightmare has happened,” said the league’s president, Bill Chow, at an emotional news conference at the complex, where the team was scheduled to return to play on Sunday night.

Instead, the town will hold a vigil for them. The stairs leading into the arena were covered with flowers, teddy bears and hockey jerseys on Saturday night.

The team has a storied history, having twice won national championships, and holds a central place in this town of about 4,800 people.

The players, aged 16 to 21, are mainstays at community fundraisers, hospitals and senior citizen homes. During a big snowstorm this past winter, they all went out to clear people’s driveways with shovels, former mayor Malcolm Eaton said.

The Humboldt arena has a capacity of 1,854, a seat for every 2.6 residents of the town.

And yet during playoff games, like the two held against the Nipawin Hawks this past week, the arena is so full of spectators, it is standing room only, Mr Eaton said. On Saturday, people came to the sports complex to meet crisis counsellors, commiserate and get updates on their players.

Only four of the team’s 24 players are from Humboldt. The rest moved there from towns across Saskatchewan and neighboring provinces, and live with local families.

“They become part of the family,” said Mr Eaton.

The town and the team have been overwhelmed by the outpouring of grief and support they’ve received since the accident. Hotels offered relatives of the victims free accommodation and a Go Fund Me webpage for the team, raised more than $1.5 million in 21 hours. - New York Times