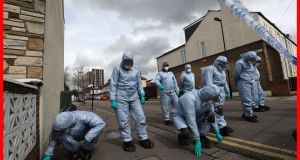 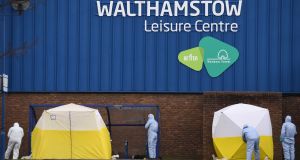 Forensic officers at the scene where a 16-year-old boy was shot on Monday evening and left in a critical condition in Markhouse Road in Walthamstow, east London. Photograph: Stefan Rousseau/PA Wire.

London’s mayor has condemnded a “violent scourge” that has hit the city recently with statistics showing police in the English capital investigated more murders in the last two months than their counterparts in New York.

The latest deaths include that of a 17-year-old girl, who was shot in Tottenham in north London on Monday night, and a man who was fatally stabbed in south London on Sunday.

The girl, named locally as Tanesha, was with friends in Chalgrove Road when she was murdered shortly before 9.30pm with neighbours suggesting her death was the result of a postcode war between rival gangs.

A woman who knew the deceased told the Press Association the victim was “just chilling with her friends” when she was shot from a car for “no reason at all”.

A friend of the murdered girl told the Press Association: “Tanesha was a very known, very lovable little girl in the community, she was not involved in any sort of problems with anyone...I can’t believe she’s gone. She was just an innocent child caught up in this stupid postcode war.”

There were 15 murders in London in February against 14 in New York, according to London’s Metropolitan Police Service and the New York Police Department. For March, 22 murders were investigated in London, with 21 reports in New York. The cities have similar populations of more than 8.5 million.

So far this year, London’s Metropolitan Police have started 47 murder inquiries, 31 of which were stabbings, while in the whole of last year, there were 130 murders in the city.

A spokeswoman for London Mayor Sadiq Khan said in a statement on Tuesday: “The Mayor is deeply concerned by violent crime in the capital - every life lost to violent crime is a tragedy.

“Our city remains one of the safest in the world ... but Sadiq wants it to be even safer and is working hard to bring an end to this violent scourge.”

In further violence on Monday night, a 16-year-old boy was left in a critical condition after he was shot in Walthamstow. Another boy, aged 15, was taken to hospital with stab injuries. Walthamstow MP Stella Creasy said the 16-year-old had been shot in the face.

A section 60 order, which allows police to search members of the public without suspicion amid the risk of serious violence, has been put in place.

The recent spate of violence has prompted scrutiny of a sharp reduction in stop-and-search activity, with use of the powers at the lowest level since current data records started 17 years ago. Stop and search has repeatedly attracted controversy, with criticism focusing mainly on the number of stops of black and minority ethnic individuals. Reforms were introduced in 2014 by then-home secretary, now prime minister, Theresa May to ensure the tactic was used in a more targeted way.

The latest incidents will bring fresh scrutiny on the government’s efforts to halt rising levels of violent crime around the country.

Figures published in January showed police recorded 37,443 offences involving a knife or sharp instrument in the year ending September 2017 — a 21 per cnet increase compared with the previous year and the highest tally since comparable records started in the 12 months to March 2011. Gun-related crime also went up by a fifth year on year, to 6,694 recorded offences.

Ministers point to findings from a separate crime survey which show overall offending is going down over the long term, but they have acknowledged that some of the increase in police-recorded violent crime is “genuine”.

In the coming weeks, the Home Office will publish a serious violence strategy, which it says will place a “new emphasis” on steering young people away from crime.

A Home Office spokeswoman said: “All forms of violent crime are totally unacceptable. This government is taking action to restrict access to offensive weapons as well as working to break the deadly cycle of violence and protect our children, families and communities.

“The UK has some of the toughest gun laws in the world and we are determined to keep it that way.”

A Downing Street spokesman said: “These are all tragic cases and our thoughts are with the families of the victims.”

“It makes faster, it makes it harder for people to cool down,” she told the Times. “I’m sure it does rev people up.”

A spokesman for Ms May said on Tuesday that “there can be no place in our society for violent crime. The government is determined to do everything it can to break the cycle.” - Reuters/PA