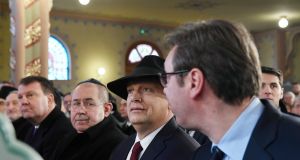 Several times a day, a pair of ageing railway cars trundle across a bridge over the Tisza river between Hungary and Ukraine, through a border crossing that on the eastern side is called “Druzhba”.

The name means “friendship” in Ukrainian – and now it feels like a hostage to fortune as neighbourly relations turn sour.

The Budapest government of prime minister Viktor Orban says ethnic Hungarians face rising discrimination and violence in Ukraine, and it has repeatedly lambasted Kiev in the run-up to Hungary’s parliamentary election on Sunday.

For Orban’s supporters, his stance proves that he is a staunch defender of Hungary and its two-million-strong diaspora in central Europe, half of whom now have Hungarian citizenship – and voting rights – thanks to laws he introduced.

Critics, by contrast, accuse his government of alarmism and exaggerating the problems that Hungarians face in Ukraine, to boost its patriotic credentials, shore up the diaspora vote and distract from corruption allegations against Orban’s allies and relatives.

One victim of recent events is the local Hungarian cultural association in Uzhhorod, capital of the ethnically diverse Zakarpattia region in southwest Ukraine.

In February, arsonists twice targeted its office beside the river Uzh in the cobblestoned city centre. The second attack gutted much of the building, which is now boarded up and blackened by scorch marks.

No one was hurt in either incident, which Orban’s foreign minister Peter Szijjarto attributed to an intimidation campaign against the 120,000 or so ethnic Hungarians in Zakarpattia fuelled by “extremist political views” in Ukraine.

An investigation into the first attack led to Poland, however, where police arrested two suspects with links to a local pro-Russian nationalist group called Falanga, whose members have allegedly fought alongside Moscow-led separatists in eastern Ukraine.

Three people from central Ukraine were detained over the second attack, which officials said was planned by an agent from the Russian-backed separatist region of Transdniestria in Moldova, to where he allegedly fled to escape arrest.

Ukraine’s authorities believe both incidents were orchestrated by Moscow’s FSB security services, as part of a multi-faceted war that the Kremlin has waged against the country since it pivoted to the West after a 2014 revolution.

“Therefore, all those who demand that we talk about allegedly anti-Hungarian manifestations or even anti-Hungarian campaigns should turn to Moscow, the Kremlin and the central FSB office.”

Zakarpattia governor Hennadiy Moskal said of the FSB and their Ukrainian recruits: “It’s like radiation. We don’t see them, but they are here.”

Szijjarto placed the blame squarely on Ukraine however, and called for international monitors to establish a mission in Zakarpattia to protect ethnic Hungarians who “live in fear in the land of their birth”.

Such alarming views are often heard from Hungarian officials and pro-government media, but it is hard to find a resident of Zakarpattia who shares them.

“We live peacefully together here. I don’t believe someone from Zakarpattia would do something like that,” Uzhhorod-born Maria (52) said of the arson attacks as she rode the rattling cross-border train with an EU passport issued by Hungary.

“Lots of nationalities live here and no one wants to make trouble.”

Elizaveta, a fellow ethnic-Hungarian from the Ukrainian village of Velyka Dobron, said the attacks were “unpleasant but people aren’t scared”.

“Life is hard here, there isn’t much work around. But I suppose that’s the same for everyone, not just Hungarians.”

Slavik Miachyn (27), who works as a wedding planner in the building next to the gutted office in Uzhhorod, said “there has been no big reaction from people here”. “This isn’t the first year of strange events in Ukraine. There are plenty of nationalists in the country, so maybe they’re trying to stir things up. But we don’t have many ‘Ukraine for the Ukrainians’-types here; no one takes them seriously.”

Hungary’s suggestion that inter-ethnic violence is brewing in Zakarpattia outraged officials in Ukraine, where Russia depicts the devastating four-year conflict that it fomented as a civil war; Budapest’s view also chimes with the Kremlin’s claim that far-right groups are terrorising ethnic minorities in Ukraine.

Peter Kreko, director of the Political Capital think tank in Budapest, wrote recently that “when the chairman [of the cultural association in Uzhhorod] thanks Ukrainian law enforcement agencies for their work, yet Peter Szijjarto accuses the Ukrainian authorities of not doing anything to combat extremism, one might suspect there are other motives in play for the Hungarian government.”

In another move amenable to Russia – which enjoys good relations with Orban’s government – Budapest has vowed to stop Ukraine moving closer to the EU and Nato until it scraps plans to slash the amount of teaching that children from ethnic minorities can have in their native language.

The problematic reforms also worry other nations with diaspora groups in Ukraine but none has reacted as dramatically as Orban’s government, which has added Ukrainian nationalists to its list of things Hungarians should fear, including migrants, the EU and liberal philanthropist George Soros.

Orban wants his ethnic kin around central Europe to be given autonomy, and he champions those communities that were left outside Hungary when the Treaty of Trianon carved it up after the first World War – a trauma that still fuels nationalist dreams of restoring “greater Hungary”.

After previous disputes with Romania, Serbia and Slovakia, Orban is now at odds with Ukraine, but at the ballot box on Sunday his abrasiveness is likely to translate into almost total support from Hungarian voters around the region.

“People like Orban the best, and it’s not just because he gives out [Hungarian] passports,” said Maria.

“The [Orban] government helps us with money for schools and churches and other things,” she added.

Orban has also promised to pay for the repair of the cultural association’s fire-blackened Uzhhorod office.

“The wellbeing of ethnic Hungarians living outside of Hungary will always be a priority for us,” government spokesman Zoltan Kovacs wrote recently.

“For all that we have done – from extending the possibility of citizenship and voting rights to ethnic Hungarians abroad to calling out Ukraine for an education law that treads on ethnic minority rights – we will not apologise. Get used to it.”