Serbia a ‘dumping ground’ for migrants blocked by EU states 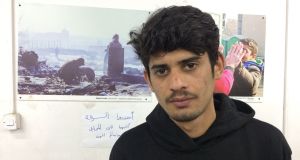 Muhammed Usman (18) from Pakistan at a migrant aid centre in Belgrade after being caught and sent back from the Serbia-Croatia border. Photograph: Daniel McLaughlin

Mohammed Usman arrived back in Belgrade with a grazed nose, sore ribs and another failure to add to his list of attempts to reach the European Union.

“I’ve tried eight or nine times to get from Serbia to Hungary or Croatia, ” said Usman (18), who left his home in Pakistan about eight months ago.

“Four or five times I’ve tried to cross the [Danube] river between Serbia and Croatia. Yesterday about 50 of us tried to cross – the water was up to my neck – and some got through. But the police caught me and pushed my face into the ground and kicked me.”

On a cold, wet morning in Serbia’s capital, Usman was among about 30 people from Afghanistan, Pakistan and Libya who were warming up and chatting in the Miksaliste aid centre, which grew out of volunteers’ response to a 2015 crisis that saw more than one million refugees and migrants trek through southeast Europe towards the EU.

Hungary built border fences to block them and other countries on the so-called Balkan route officially closed their frontiers to migrants in March 2016, but thousands of people fleeing war and poverty still cross the region – and get stuck here – each year.

“About 200 people come here each week,” said Djordje Kostic, a co-ordinator at Refugee Aid Miksaliste, where migrants can get clothes, basic medical help, advice and access to computers.

“Women, unaccompanied minors, old people and ill people are the ones who usually spend the night here . . . The state doesn’t let us feed them, but sometimes locals hand out food.”

City authorities last May demolished old warehouses that had provided shelter for thousands of migrants, to clear the site beside the Sava river for a lavish development called Belgrade Waterfront.

“Now there are lots of smaller places where they sleep – apartments, empty buildings, hostels, and some sleep outside,” said Kostic.

“They’re all just waiting to move on. We see lots of people here who’ve just come back from the border. They often have bruises, burns or broken bones and they say their money and documents were stolen by border police.”

Médecins Sans Frontières runs a small clinic opposite the Miksaliste centre and closely monitors the flow of refugees and migrants through the Balkans and the treatment they receive from the region’s governments and border guards.

“There are now about 4,000 refugees in Serbia at any one time, and approximately more than 20,000 passed through last year,” said Andrea Contenta, MSF’s humanitarian affairs officer in Serbia. “However . . . no one has the real sense of how many people continue to cross the Balkans and also how many continue to die crossing those borders.”

MSF believes at least 147 people died in the region while trying to reach the EU in 2017, and 39 have died so far this year.

“These are only the deaths reported in local media, but we do not know how many people got lost crossing the mountains in the Balkans, or how many are lost in the snow,” Contenta told The Irish Times.

Last October, MSF said accounts from migrants in Serbia showed that border police in Hungary, Croatia and Bulgaria were “intentionally using violence to deter children and young people from seeking asylum in the European Union”.

“The vast majority of these accounts followed the same pattern of beatings, dog bites and the use of irritant spray that MSF teams have heard about for the past two years of seemingly systematic violence against people trying” to enter the EU.

Serbian authorities have moved most migrants into state-run camps without offering any realistic chance for them to gain asylum, integrate into society or even to go home.

“Serbia is not so much a transit country now as a waiting room or a dumping ground,” he added. “According to accounts in the camps, there are robberies, fights, drugs, sexual exploitation. And the response by the authorities is usually repression by force or ignoring completely these issues.”

The EU has launched infringement proceedings against Hungary over its draconian asylum laws, while giving Belgrade far more money to boost border security than to improve conditions in its camps. Serbia insists it is doing its best with limited resources to handle thousands of people who do not want to be here.

“I want to go to Italy, but I’ll stay in Serbia until the weather gets a bit better,” said Asnar Emen (24), as he waited for a beard trim from a volunteer in the Miksaliste centre. “I have family in Pakistan to support, and there’s no way I can go back. If I had a chance of a life there I would never have taken all these risks to get here.”