US Politics: The most ‘European’ Democratic candidates are the least helpful to its interests 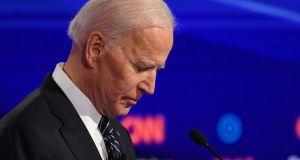 Joe Biden: Whatever the source of his resilience – in national if not state polls – allies of the US should hope it lasts. Photograph: Robyn Beck/AFP via Getty Images

So thrilling is America’s Democratic presidential primary, so rich in drama, that the man who led by 10 points a year ago is winning by just the eight now. If Joe Biden does not slow this rate of decline, he stands to forfeit pole position as early as 2024.

How to explain the impertinent survival of the former vice-president? The media has made clear its preference for a fresher candidate. Even loyalists wonder about his robustness at 77. He is said to have “electability” – but then a man who was said to lack it now roams the White House, and he must have got in there somehow.

Whatever the source of Biden’s resilience – in national if not state polls – allies of the US should hope it lasts. Of all the Democrats, he is the surest and perhaps the only way back to the world they once knew.

Because Donald Trump, a Republican, has so scuppered the international order, it does not follow that any Democratic president would restore normality. Some of the party’s hopefuls would just bring a different kind of abnormality.

While no pacifist, Vermont senator Bernie Sanders would be more reluctant to use military force than any president since 1945. And to no universal cheer abroad. Robert Kagan’s old line about peace-loving Europeans and martial Americans always simplified a more ambiguous reality. It was the first who pressed the second into Kosovo in the 1990s and into Libya in the last decade.

Just this week, Emmanuel Macron, the president of France, urged Trump against a partial withdrawal of US forces from Africa. Under Sanders, these schisms would be far more regular, and far less liable to end in American climbdown. In his own way, he would be as large a shock to the international system as Trump has been.

As for his rival senator, Elizabeth Warren of Massachusetts, the dread for US allies would not be a philosophically war-averse America so much as a distracted, inward-looking one. The corollary of her fluency on domestic social reform is a certain terseness about the outside world. A year into her candidacy, we do not know if she thinks it is US business to stymie the rise of China, a question with as many implications for allies caught in the tussle as for either superpower. The worry is that there is more of indifference than indecision about her vagueness.

These are not just the foibles of two candidates. These are expressions of a deeper change on the American left. What began as dismay at the “forever wars” has widened into doubts about, say, the wisdom of spending half of the discretionary federal budget on defence while citizens fall through the sieve of a welfare state.

“Nation-building at home”, Trump’s predecessor Barack Obama once called it, but he was always more internationalist than that. To revisit his speech in the bellwether district of Berlin Central in 2008, he was messianically so, even as a mere candidate. The post-Obama left seems to mean its domestic focus this time.

And with cause. No one who has walked through Skid Row of late could dismiss the moral case for a turn inward, at least for a while. Were I American, I would vote for it. Foreign allies have their interests, though, and they are so plainly served by an outward-looking, burden-bearing US. How telling that even Macron, a sort of European nationalist, who wants a strategically “autonomous” EU, views American tentativeness with so little relish.

Perhaps US allies could have a reprise of the pre-Trump world under Pete Buttigieg. So very little can be said with confidence, though, about a 37-year-old mayor from Indiana’s fourth-largest city. Neither he, nor many active politicians anywhere, are as woven into Nato, the trade consensus and the rest of the institutional tapestry of the postwar order as Biden.

The wrong kind of experience, Sanders and Warren say, citing his vote for the Iraq war. But an 18-year-old mistake should trouble other countries less than the parochial left. The most “European” candidates – the most social democratic – are the least helpful to European interests.

European or otherwise, America’s foreign friends will not decide the outcome of the Iowa caucuses next month. They will not brave high-school gymnasiums in winter and traipse into corners marked Biden, Sanders, Warren or Buttigieg, according to preference. If they were let in on this pageant, though, with its equal measures of drama and bathos, their favoured candidate should be obvious by now.

Biden is just a portal into the past, say his radical challengers. For US allies, that is the point. – Copyright The Financial Times Limited 2020