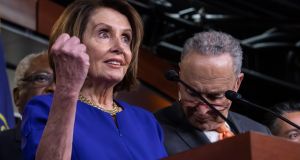 Intelligence committee chairman Adam Schiff, who led the probe, and judiciary chair representative Jerry Nadler, whose committee approved the impeachment articles, as among the managers of the prosecution.

Mr Schiff and Mr Nadler will lead the seven-member team that includes a diverse selection of politicians with courtroom experience.

The House is expected to transmit articles of impeachment to the Senate against Mr Trump on Wednesday, paving the way for an impeachment trial in the upper house.

Ms Pelosi confirmed that she intended to move the articles on Wednesday – a crucial procedural step that will allow the upper house to begin the trial.

“The president and the senators will be held accountable,” Ms Pelosi said, as she noted that the House had “upheld its constitutional duty to defend democracy for the people” by passing two articles of impeachment against Mr Trump in December.

The next stage in the impeachment process comes four weeks after the Democratically controlled House voted to impeach Mr Trump on two counts – abuse of power and obstruction of Congress.

New details of Mr Trump’s efforts on Ukraine emerged late on Tuesday, increasing pressure on senators to call witnesses in the trial, a step that Senate majority leader Mitch McConnell has been reluctant to take.

House investigators announced they were turning over new records of phone calls, text messages and other information from Lev Parnas, an associate of Mr Trump’s lawyer Rudy Giuliani.

He said this and other new evidence must be included in the Senate trial.

Mr Trump is alleged to have pressurised the Ukrainian leader to open an investigation into Mr Biden and his son Hunter, who served on the board of a Ukrainian gas company while his father was in office.

Mr Biden is in the Democratic race to become the party’s presidential candidate in November’s election, leaving Mr Trump open to the accusation that he was soliciting foreign interference in the election.

After weeks of private and public testimony from witnesses, the House of Representatives voted to impeach the president.

No Republicans voted in favour, signifying strong support for Mr Trump’s position within the Republican party.

With Republicans controlling the 100-member senate, Mr Trump is widely expected to escape removal from office, given that a two-thirds Senate majority is needed to convict him.

Once the articles move to the upper house, it will fall to Senate majority leader Mitch McConnell to decide the scope and structure of the trial.

Mr McConnell said all Republican senators are on board with his plan to start the session and consider the issue of witnesses later.

Senate Republicans also signalled they would reject the idea of simply voting to dismiss the articles of impeachment against Mr Trump, as Mr Trump himself has suggested.

Mr McConnell has previously indicated that he would like to follow the precedent set by the Bill Clinton impeachment trial, whereby the Senate did not vote on whether to call witnesses until after opening statements had been heard.

Speaking on the Senate floor on Tuesday, Chuck Schumer – the top Democrat in the chamber – reiterated his call for witnesses to testify.

“All we’re asking is for the president’s own men, his appointees, to come forward and tell their side of the story,” he said.

Former national security adviser John Bolton, a key figure in the White House’s dealings with Ukraine, said last week he would testify in a Senate trial if requested.

Should the articles of impeachment move to the Senate on Wednesday as expected, there may be a few days of administrative activity before the trial officially begins.

At Tuesday’s private Republican lunch, Senator Rand Paul warned that if witnesses are allowed, defence witnesses could also be called.

He and other Republicans want to subpoena Mr Biden and his son, Hunter. Mr McConnell is drafting an organising resolution that will outline the steps ahead.