If Donald Trump has a policy on the Middle East, it is incoherent and crisis-led. The US’s impetuous assassination of Qassem Suleimani could strengthen, not damage, Iran 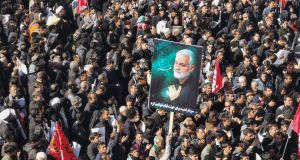 Iranian mourners gather for the burial of Qasem Soleimani in his hometown Kerman. The assassination of the 62-year-old general heightened international concern about a new war in the Middle East. Photograph: Atta Kenare/AFP/Getty

The killing of Qassem Suleimani at the beginning of the month was seen by many as a possible prelude to a fresh war in the Middle East, with expectations of increased escalation of the conflict between the US and its allies and Iran and its proxies that has characterised the region, at least since Donald Trump became US president.

The unexpectedly measured response of the Iranians, in the form of missile strikes on US bases in Iraq, that caused significant structural damage but no apparent loss of life, followed by Trump’s comparatively low-key response to this, appear to indicate that the moment of crisis has passed.

However, the events of the past week or so raise a number of critical questions for the US and the Middle East.

Iran’s limited response to date appears to have quelled fears of outright war. However, it would be a mistake to assume that Iran will not retaliate further. The critical questions are how, when and where?

While Iran’s foreign minister, Mohammad Zarif said revenge was now “concluded”, other sources indicated that over 100 targets had been selected for future attacks if need be, while Iran’s Revolutionary Guard Corps, of which Suleimani was a key member, warned that any country serving as a base for future US attacks would also be attacked. This is seen as referring directly to the Gulf states and Israel.

However, the killing of Suleimani is likely to have other repercussions at both the domestic and regional levels in the Middle East. Both Iran and Iraq have witnessed popular protest in recent months.

In November of last year, some 1,500 people were killed in two weeks of unrest in Iran which began in response to a surprise increase in fuel prices but quickly developed into the one of the most significant challenges to clerical rule since the 1979 revolution.

Within a couple of days, protesters in Tehran were calling for an end to the Islamic Republic and the downfall of its leaders. In response, Iran’s supreme leader, Ayatollah Khamenei, ordered a brutal crackdown.

Opinions vary as to how the killing of Suleimani will impact on popular opinion in Iran. There is some speculation the US attack will lead to a “rally round the flag” response from Iranians who see their government and their country under attack. The reports of millions of mourners turning out for Suleimani’s funeral a short few weeks after the country’s security forces turned their weapons on protesters across the country appear to bear this view out.

Others are more sceptical, noting that Suleimani’s record of involvement in the violent repression of protest in the country won him many enemies and argue that the huge turnout may have been, at least in part, orchestrated by the regime.

Iraq too witnessed the emergence of popular protest in late 2019. Starting in October, people took to the streets in Baghdad and in the Shia majority areas south of the country to protest against corruption, high unemployment levels and foreign interference. Increasingly the protesters directed their anger at the political elite and at Iran, their primary foreign backer.

Although hundreds of people were killed in a government crackdown, the protests continued. However, much of this has been undermined by the killing of Suleimani. The Iraqi parliament has passed a non-binding resolution calling on the government to expel US troops from the country in what would be a major victory for Iran.

The assassination has also provided pro-Iran forces in Iraq with nationalist legitimacy and the freedom to portray anti-Iran protesters as pro-American. In the short-term, at least, those who oppose Iranian influence in Iraq fear marginalisation.

The impact of the assassination of Suleimani is also likely to be felt at the regional level. According to the Iraqi prime minister, Adil Abdul-Mahdi, at the time t he was assassinated, Suleimani was in Iraq on a diplomatic mission to mediate between Iran and Saudi Arabia, which conflicts with US claims.

Whatever the truth of this, in recent months there have been tentative signs of a rapprochement between the two regional powers who have been in indirect, proxy conflict across a range of settings in recent years, most notably in Syria and Yemen.

In September of 2019, the Saudi crown prince, Mohammed Bin Salman, in an interview with CBS, expressed the view that a peaceful, political solution to regional tensions was preferable to a military one. In October, the Pakistani prime minister, Imran Khan, visited both Saudi Arabia and Iran in what was seen as a mission of reconciliation that would not have been possible without the approval at the highest level in both countries.

The Iraqi prime minister has also reportedly relayed messages about de-escalation between the Saudi crown prince and the Iranian leadership. Following the assassination of Suleimani, Bin Salman sent his brother, Khalid, the deputy minister for defence to Washington and London to urge restraint, according to the Saudi-funded newspaper, Al-Sharq al-Awsat, while the former Saudi foreign minister, Adel Aljubeir has also stressed the dangers of escalation.

Some of this may have to do with fears in the Gulf that the US can no longer be relied upon, in the event of direct confrontation with Iran. Trump’s decision in June of last year to back down from a response to the Iranian downing of a US surveillance drone, combined with his willingness to allow Turkey to attack erstwhile Kurdish allies, have made other US allies in the region nervous.

This, ironically, plays into the strengthening of Iran’s position in the region. As a recent report from the International Institute for Strategic Studies pointed out, Iran has extended its influence in the region though its ability to develop and maintain relationships with extraterritorial entities to achieve its strategic ends.

It has long-standing links with non-state actors in the form of Hizbullah in Lebanon and Hamas and Islamic Jihad in Palestine. The outbreak of conflict in Syria threatened the loss of Iran’s only state ally.

However, by 2019, Iran had emerged from that conflict in a stronger position than any actor other than Russia while the unexpected fall of the Yemeni capital, Sanaa, to the Shia Zaydi Houthi movement allowed Iran to extend its influence to Saudi borders and to enjoy a position of regional power that would have been unimaginable in the past.

Finally, the impetuous nature of the decision to carry out the strike on Suleimani raises profound questions as to how US policy on the Middle East is formulated. Indeed, according to some critics, there is no such policy, merely the satisfaction of the president’s ego.

In the immediate aftermath of the killing, president Trump declared that the US had identified 52 targets, including some of cultural significance, which would be attacked if Iran struck any Americans or American assets.

Almost immediately he withdrew the threat in apparent ignorance of the fact that attacking cultural sites would be a violation of international law. He followed this with an almost conciliatory response to the Iraqi missile strikes on US bases in Iraq.

Trump has been criticised for conducting diplomacy single-handedly and without seeking advice either from experts in his own administration or that of US allies. More scathingly, Daniel Byman has characterised his Middle East policy as moving from crisis to crisis and from tweet to tweet without an overall game plan.

The immediate crisis in the region may have passed for now. However, the unprecedented volatility of US policy in the Middle East means that the next crisis is almost certainly not too far away.