US Politics: American jingoism longs both for the quiet life and to answer provocations 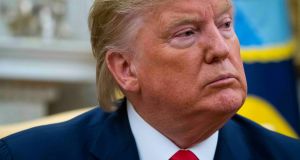 Donald Trump is a deceptively conventional US president of the 21st century. Elected to unpick his nation’s entanglements in the Middle East, he has served to deepen and extend them. What most separates him from his immediate predecessors is his lack of an alibi.

George W Bush had terrorist atrocities to avenge, even if he avenged them with a fiasco or two. As for Barack Obama, the Arab spring dawned and then darkened over the course of his tenure. It required an answer.

No external shocks of comparable size have forced Trump’s hand. What has brought the US to its present showdown is, as well as Iranian goading, the paradox of his own worldview.

The president sincerely aspires to a lighter global workload for the US. But his very nationalism – his American amour propre – makes him amazingly easy to provoke into conflict. This glitch is not in the temperament of one man, but in the whole idea of America First, of nativism everywhere. It can have its chest-beating sense of honour or it can have its dream of a quiet life in a world of sovereign states minding their affairs. Having both seems fantastic, as the first will tend to compromise the second.

On this occasion, it is in the Middle East where the two impulses clashed, but it might have been the Korean peninsula, where Trump has at different times questioned the point of the US garrison and openly pondered all-out war against the North. A nationalist must always face two ways on the question of power-projection.

Nothing captures the internal schism better than his threat on Monday to sanction Iraq if it forces US troops to leave. Trump, remember, has wanted almost exactly that for the better part of his young political career.

All it took was an impudent framing of the same idea – by a sovereign parliament – to make him reach for harsh measures to save American face. If this kind of inconsistency were down to the foibles of an individual, we could at least expect something different after him. But another president of nativist bent would be prone to the same thing. The problem is inherent to the creed.

To the extent that Trump strays from his 2016 campaign, which seemed to forswear Middle Eastern wars, it is easy to blame institutional capture. Much is made of the influence of Mikes Pence and Pompeo. Neither the vice-president nor the secretary of state seemed all that sold on circumspection abroad in the first place. Pompeo this week said that “endless wars are the direct result of weakness”, unconsciously recalling Gore Vidal’s screed against militarists, Perpetual War for Perpetual Peace.

If these hands are able to mould the president in their image, though, it is because the clay is so pliable. A trait of jingoists everywhere – hair-trigger sensitivity – is hard to reconcile with their yearning for a focus on the homeland. Trump is no exception. Geopolitical retrenchment requires almost the opposite cast of mind, in fact: one that is to some extent impervious to notions of standing and prestige. It is hard not to think of the obsession with honour that prolonged US involvement in Vietnam, even as it aspired to withdraw.

Three years into his presidency, it is plain that voters who favour prudence abroad are no likelier to get it from Trump than from the “blob” that he traduced (with some justice) for its restive do-goodery. It is an open question whether they will ever get it from anyone. The lack of an organised movement for foreign policy quietism remains odd in Washington. It is hard to square with the geography of a nation that can mostly pick and choose its exposure to the world. It is even harder to square with public opinion.

“We thought Trump was different,” tweeted Ann Coulter, the conservative commentator on Tuesday. So did millions.

Pure isolationism, of the kind that still regrets US entry into the world wars, did not outlive Vidal, and did not deserve to either. It tended to pair easily with some distasteful views and the Sage of Amalfi was not above them. The paleoconservatism of Pat Buchanan is about all that is left of what was the mainstream of US foreign policy before Pearl Harbor.

The dread for a great power is being stuck in this loop, forever set on the idea of retrenchment, just not on any one practical opportunity for it. – Copyright The Financial Times Limited 2020