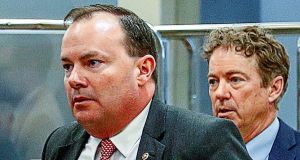 Mike Lee (left), a Republican senator from Utah: “Somewhat unsatisfied” with the “legal, factual and moral justification” for the attack on Qassem Suleimani. Photograph: Tom Brenner/Reuters

Mike Lee, a Republican senator from Utah, blasted Trump administration officials for offering an inadequate briefing on the intelligence that justified the decision to kill Iranian general Qassem Suleimani, triggering the crisis in relations with Tehran.

Mr Lee’s complaint marked a rare crack in Republican support for the US attack on Suleimani last week, with the senator saying he would support Democratic efforts to rein in President Donald Trump’s ability to launch further military action against Iran without congressional support.

Mr Lee said he was “somewhat unsatisfied” with the “legal, factual and moral justification” for the attack, calling the briefing the “probably the worst” he had experienced on a “military issue” during his nine-year career in Congress.

His biggest source of distress was that the senior national security officials who conducted the briefing cautioned the lawmakers against publicly questioning the rationale for military action.

“What we were told over and over again was, look, this action was necessary, this was a bad guy, we had do it, and we can’t have division, we can’t have dissension within our government, or else it sends the wrong signal to the Iranians,” Mr Lee said. “I think that’s completely wrong”.

The Trump administration has justified the decision to kill Suleimani, seen by some as Iran’s second-most powerful figure, as a pre-emptive strike to foil plots to kill hundreds of Americans across the region. But some lawmakers have expressed doubt about the need for an assassination and fear that the decision risks ceding US influence in Iraq to Iran and puts the US on a path to full-blown war.

Democrats emerging from the classified briefing also attacked the rationale for the killing.

“The bottom line is this: I did not hear evidence of a specific imminent threat that would allow an attack without congressional authorisation. With consequences as serious as these, that is unacceptable,” said Chris Murphy, a Democratic senator from Connecticut on the Senate foreign relations committee.

Nancy Pelosi, the Democratic speaker of the House of Representatives, whose members were also briefed on Wednesday, announced a vote on Thursday in the lower chamber to curb Mr Trump’s ability to launch a new strike against Iran without congressional approval. Tim Kaine, a Virginia Democratic senator, has introduced a parallel resolution in the upper chamber

“Members of Congress have serious, urgent concerns about the administration’s decision to engage in hostilities against Iran and about its lack of strategy,” Ms Pelosi said in a statement. “Our concerns were not addressed by the president’s insufficient War Powers Act notification and by the administration’s briefing today.”

Iran launched missiles at US forces in Iraq on Tuesday night in its first military retaliation for Suleimani’s death, but Mr Trump said he would respond for now by imposing new economic sanctions on Iran rather than by military means.

Despite Mr Lee’s criticism, many of Mr Trump’s Republican allies on Capitol Hill said they were happy with the briefing.

“I think people have lost their minds about who we’re dealing with. A third-grader could’ve figured this out. You don’t need the CIA. You’ve got an embassy being ransacked. You’ve got a contractor killed,” said Lindsey Graham, the Republican senator from South Carolina and an Iran hawk.

Mark Esper, defence secretary; Mark Milley, top military commander; Mike Pompeo, the secretary of state; and Gina Haspel, CIA director, were expected to give the briefings. Participants did not disclose who spoke at the closed-door sessions.

The lawmakers were expected to touch on whether Suleimani himself was going to be involved in any expected attacks, how killing him would stop the attacks, whether any other commanders would have been involved in the plots and if they were still operational.

US media reports suggest Mr Trump decided to pick an extreme option from those presented to him in retaliation for crossing what he saw as a humiliating red line – the death of an American contractor in Iraq by rocket fire on December 27th and televised attacks on the US embassy in Baghdad, both of which were blamed on Iranian forces.

Mr Esper insisted on Tuesday that the intelligence that led to the strike was “exquisite” and indicated attacks were forthcoming within “days” rather than weeks, but he acknowledged that it was only one factor among those behind the decision and that “a full panoply” of options had been available.

“The options we presented were all options we believed we could deliver on and would be effective,” he told reporters at the Pentagon on Tuesday, in comments that appeared to suggest Mr Trump had several other options besides striking Suleimani.

The White House has also considered downgrading the classification of intelligence in order to share it with allied foreign governments to better enable them to defend in public Mr Trump’s decision to kill Suleimani. It is also considering making public a sanitised version of the intelligence to help fend off further criticism. – Copyright The Financial Times Limited 2020

1 Coronavirus: What we know so far about how Ireland is affected
2 Mass gatherings due to go ahead in Ireland amid coronavirus outbreak
3 Cancellations and confusion as coronavirus threat edges closer
4 Stormont finance minister told at Sinn Féin rally he has nothing to apologise for
5 ‘Several killed’ in shooting at Milwaukee brewing company
Real news has value SUBSCRIBE