Buttigieg and Biden show the US political centre still holds

US Politics: Left’s takeover of Democratic party is slower and patchier than anticipated 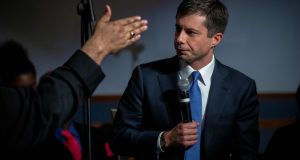 Pete Buttigieg tells US Democrats that he used to campaign for a “young man with a funny name”. If you took a chance on Barack Obama, implies the mayor of South Bend, Indiana, then why not me? Look where a more seasoned candidate landed you in 2016.

Even this comparison understates the audacity of Buttigieg’s hope. Obama was elected US president at 47. He is 37. Obama had been a senator and semi-celebrity for four years. As recently as January, Mayor Pete was unknown beyond the 100,000 people he governs. Obama had astronomical star power. Buttigieg has a kind of valedictorian wholesomeness.

Take your pick, then, as to the shock of the year: his surge towards the Democratic presidential nomination, or the staying power of Joe Biden, maladroit, visibly aged but somehow still leading. Either way, the presence of two moderates at the front of the field, or thereabouts, challenges an assumption that prevailed at the start of the year.

If any trait has been punished in this contest, it is not moderation at all so much as inauthenticity

The left’s takeover of the Democratic party is proving to be much slower and patchier than anticipated. Buttigieg’s recent gains have come mostly at the expense of the wealth-taxing Elizabeth Warren. Bernie Sanders, the one avowed socialist in the race, is polling well but not yet leading even in his adjacent state of New Hampshire.

Truths that should have been self-evident long ago are starting to tell. The primary voters are older and more conservative than the party elite. Some are minorities whose loyalty to the Democrats is often mistaken for doctrinal liberalism. Alexandria Ocasio-Cortez, the left’s coming force in Congress, is not all that typical of the party’s base, and nor is the Daily Show.

And this is before we reckon with the disciplining effect of president Donald Trump. For Democrats, his re-election is a menace to reproductive freedom, to the environment, to the state itself. If averting it means choosing a moderate, the better to tempt swing voters, then the revolution can wait for another time. “No malarkey”, as the painted flank of Biden’s campaign bus has it. The stakes are too high.

If any trait has been punished in this contest, it is not moderation at all so much as inauthenticity. The biggest flops have been perceived careerists who seemed to affect left-wingery after years of subtler politics.

Senators Cory Booker, Kirsten Gillibrand and Kamala Harris, who dropped out of the race on Tuesday, never mustered a persuasive answer as to why they were running. What unites the leading four is not the content of their platforms but the apparent sincerity with which they stand on them. Biden means his nostalgic bipartisanship. Buttigieg means his Emmanuel Macron-ish technocracy. Being of the centre ground is not itself fatal.

None of this is to say that either man, much less former New York mayor Michael Bloomberg, will carry the day. The left still has all the social conditions to win. According to the Census Bureau, the US is more unequal than it has been in 50 years. Medical bills are the top cause of personal bankruptcy even as 18 per cent of national output goes on healthcare (including as large a public component as Britain). As for the vaunted market, the economist Thomas Philippon sets out America’s trend towards monopoly and oligopoly in The Great Reversal.

Mature democracies avoid revolution by self-correcting when the social balance tips too far one way. Now would seem a good time. The correction is likelier under a president Warren than a president Biden or Buttigieg. It is hard to believe that a candidate so attuned to modern class schisms has already had her moment.

If the left still has a chance, though, it is not the overwhelming one of such recent hype. Among the lessons of the year is that commentators should retire their favourite line of verse. The centre can hold. It held in 2018, for one thing. The reason Trump is being impeached is that a middle-of-the-road campaign gave Democrats possession of the House of Representatives. A similar campaign has put two moderates within sight of the presidential nomination.

The idea that Americans are being forced to choose between left and right extremes, like the luckless British, not only draws a spurious equivalence between Trump and Warren, it ignores all the pickings in between.

These are not lost on actual primary voters and caucus-attendees. They want to win, not feel good. Democrats hate the president so much, Republicans used to say, as to “derange” them. No longer. They hate him so much as to make them prudent. – Copyright The Financial Times Limited 2019