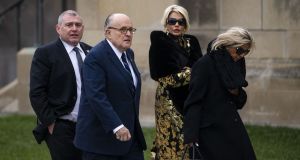 New details have emerged of US president Donald Trump’s pressure campaign on Ukraine, intensifying demands on Senate Republicans on the eve of a historic impeachment trial to include witness testimony and additional documents in the proceeding.

The dozens of pages of notes, text messages and other records lay out work conducted by Rudy Giuliani, Mr Trump’s personal lawyer, and his associate Lev Parnas on behalf of the president.

They include handwritten notes scrawled on a sheet of hotel paper at the Ritz-Carlton Hotel in Vienna that mention getting President Volodymyr Zelenskiy of Ukraine to announce an investigation of former US vice president Joe Biden and his son Hunter.

Democrats released the records as House of Representatives speaker Nancy Pelosi announced a Wednesday vote to name House prosecutors and send the articles of impeachment against Mr Trump to the Senate to begin the trial.

The material underpins the charges against Mr Trump, and highlights how much is still to be learned about the scope of a scheme that the impeachment charges call a blatant effort to solicit foreign help in the 2020 presidential election.

The documents, provided by Mr Parnas, include a series of exchanges between him and a Ukrainian prosecutor, Yuriy Lutsenko, who was helping Mr Giuliani unearth damaging information about the Bidens.

In March 2019, Mr Lutsenko messaged Mr Parnas on the WhatsApp messaging service to complain that the Trump administration had not yet ousted the US ambassador to Ukraine, Marie Yovanovitch. Mr Lutsenko, who had clashed withMs Yovanovitch and wanted her gone, appeared to link her removal to his assistance in attacking the Bidens.

“It’s just that if you don’t make a decision about Madam – you are bringing into question all my allegations. Including about B,” he wrote to Mr Parnas, in apparent references to Ms Yovanovitch and Mr Biden.

Mr Lutsenko added: “And here you can’t even get rid of one <WC1>[female] fool,” an apparent reference to Ms Yovanovitch. He also inserted a frowning emoji. “She’s not a simple fool[,] trust me,” Mr Parnas responded. “But she’s not getting away.”

The US president, with Mr Giuliani’s encouragement, recalled Ms Yovanovitch from her post in late April.

The Parnas documents also include a May 2019 letter from Mr Giuliani requesting a meeting with Mr Zelenskiy in which he said Mr Trump had “knowledge and consent” of his actions. It is the first document to be made public to say as much.

Mr Parnas, who is under federal indictment, has only recently been cleared to hand over the material to Congress, and an official involved in the inquiry indicated more was likely to be made public soon.

Senior Democrats who led the House impeachment inquiry said the new records underscored the need for senators to demand additional evidence at trial. The new documents, they said in a statement, “demonstrate that there is more evidence relevant to the president’s scheme, but they have been concealed by the president himself”.

“There cannot be a full and fair trial in the Senate without the documents that President Trump is refusing to provide to Congress,” they said.

Ms Pelosi said she would announce the names of her impeachment managers at 10am US eastern time (3pm Irish time) on Wednesday, and a vote to formally name them and send the articles was scheduled for early afternoon. “The American people deserve the truth, and the constitution demands a trial,” she said.

In the Senate, Mitch McConnell, the majority leader, indicated that senators would be ready to receive the charges Wednesday and take sworn oaths to render “impartial justice” in the trial shortly thereafter, if not the following day.

But after weeks of demanding the charges be brought forward speedily, he said the Senate would put off considering the terms of the trial or the substance of the case for nearly a week, until next Tuesday. That would allow lawmakers time to vote late this week to approve Mr Trump’s new trade agreement with Canada and Mexico and give senators time to travel home this holiday weekend before the trial requires them to remain in the Senate chamber six days a week.

The announcements paved the way for a choreographed exchange between the two chambers that will unfold on Wednesday as they look toward the third presidential impeachment trial in American history. With little precedent to guide them, House and Senate leaders were working with chief justice John Roberts Jr, who will preside over the trial, to nail down the timing of what was to come.

If all goes according to plan, the trial would officially open about a month after the House voted to impeach Mr Trump for abuse of power and obstruction of Congress, charges that stemmed from his efforts to pressure Ukraine to investigate his political opponents, then stonewall the House inquiry into his actions.

The White House, readying its own case, welcomed the progress toward a trial and predicted Mr Trump’s eventual acquittal. “We’ve been ready for a long time,” Eric Ueland, Mr Trump’s congressional liaison, told reporters in the Capitol after meeting Senate Republicans over lunch. “We could have started the morning after the House vote in December. We’re good to go, and we’re ready to go, and we’d be shocked if the House isn’t ready to go either.”

Mr Trump’s campaign was already capitalising on what promises to be a brutally partisan proceeding, circulating a fundraising appeal signed by the president that announced, “We’re taking this fight to the Senate”, and asked supporters to donate to an “emergency 2020 impeachment defence fund”.

Behind the scenes, Mr Trump’s team was bracing for a potentially damaging period, inviting conservative activists to the White House to plan strategy for the trial. Lawmakers were anxious, too, as they moved toward an unpredictable process that will test an already strained Senate, consuming lawmakers for weeks or longer.

Debates raged in public and private over difficult questions that may darken the proceeding, including whether to call witnesses and compel new evidence or to consider a motion, endorsed by Mr Trump but opposed by Republican leaders, to quickly dismiss the charges against him with no arguments or deliberations.

Mr McConnell used an extended Republican luncheon to brief lawmakers on protocols and procedures. He played down Mr Trump’s apparent enthusiasm for a motion to dismiss, insisting that such a move was not viable.

Although he has resisted seeking new testimony, the majority leader signalled to lawmakers during the luncheon and an earlier private meeting that he was receptive to a “reciprocity” proposal by Texas senator Ted Cruz, Senate officials familiar with the matter said.

The proposal, first reported by Politico, calls for Republicans to support calling witnesses the president has pushed for, like Hunter Biden, if Democrats secured the votes for one of their witnesses.

“When you get to that issue, I cannot imagine that only the witnesses that our Democratic colleagues would want to call would be called,” Mr McConnell told reporters after the lunch ended.

Mr McConnell, working to hold his party together against Democratic complaints, predicted that he still had the Republican votes to set rules for the trial next week. His proposal would put off a debate over calling witnesses until after opening arguments and senatorial questioning is complete.

“All 53 of us have reached an understanding very, very similar to the one that was achieved at the beginning of the Clinton impeachment trial,” Mr McConnell said, referring to the 1999 trial of then president Bill Clinton.

Democrats argue that a trial without witnesses and new evidence would be a sham, and want a guarantee up front that they will be included. Mr Trump blocked the House from gaining access to both during its impeachment inquiry.

In her statement earlier in the day, Ms Pelosi accused Mr McConnell and Mr Trump of working together to cover up the facts the House had unearthed. “The American people will fully understand the Senate’s move to begin the trial without witnesses and documents as a pure political cover-up,” she said. “Leader McConnell and the president are afraid of more facts coming to light.”

Ms Pelosi plans to convene her newly appointed managers at 5pm on Wednesday to complete paperwork to transmit the articles. Immediately after, the House managers will ceremonially walk the articles of impeachment from the House, through the Rotunda, to the Senate. When they do, they will formally present the articles.

The team of managers is likely to be led by Adam Schiff, the chairman of the House intelligence committee who spearheaded the Ukraine inquiry, and House judiciary committee chairman Jerrold Nadler. – New York Times