Partisanship sates a deep lust for belonging in America

US Politics: With Trump, what matters is his aggression on behalf of the Republican tribe 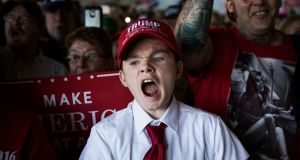 Jaden Rams (13), yells his support for Donald Trump, the then Republican presidential candidate, during a rally in Grand Junction, Colorado in October 2016. Three years later, Rams would call the presidential campaign and its aftermath “a travesty for American unity”. File photograph: Damon Winter/New York Times

Politics is increasingly likened to sport in its tribal allegiances. This is to do sport an unconscionable disservice. The authentic fan is healthily cynical about their own team, after all. Scathing, even. Blind enthusiasm tends to be the mark of the try-hard newcomer. No, a political party is capable of inspiring a kind of mob loyalty – a credulity – that is well beyond a mere Manchester United or New England Patriots to arouse.

The point was made again last week, when the US House of Representatives voted almost exactly along party lines in the impeachment of President Donald Trump. As for the public, from whom politicians take their cue, surveys record almost all Democrats supporting the action and almost all Republicans opposed. A voter’s political priors are the best predictor of their judgment on this question. The balance of evidence matters less, as does the president’s near-confession in front of television cameras when the Ukraine scandal first broke.

The depth of American partisanship is well understood. The reasons for it are not. We know that supreme court nominees are confirmed by narrower, bitterer margins than in the days of cross-party unanimity. We know that no president has won 400 electoral college votes since 1988. We know that Republicans once renounced their own president, Richard Nixon, in a way that is hard to imagine 45 years later.

We just do not know why. Explanations come as grand as the absence of a geopolitical threat to bring Americans together since the fall of the USSR. They come as small as the deregulation of broadcast media in the 1980s, exposing Americans to Fox News’s right-wing noise and the too-easy liberalism of the Daily Show.

As another partisan decade winds down, I wonder if the ultimate answer is simply the human need to belong. As politics was coarsening in the 1990s, the Harvard academic Robert Putnam was recording the collapse of associational life in the US. Americans, who had once found meaning and togetherness in trade unions, bowling clubs and other voluntary groups, were less and less likely to belong to such things.

The US had a giant market and a formidable state, but not a textured civil society to fill the space in between. And this was before the decline in religious affiliation that constitutes perhaps the single most important social trend since then.

Seen from this angle, political tribalism starts to make more sense. Perhaps it is nothing so much as a substitute for these vanished forms of human contact. It allows an atomised individual to plug into a kind of fellowship. It sets up an Other against which one might define oneself.

What it might lack in face-to-face intimacy, it makes up for with an enclosed world of partisan media, in which a person need never leave the (virtual) company of the like-minded.

Notice the unimportance of ideological content here. Trump overturned a generation of laissez-faire economics and interventionist foreign policy and Republicans still cherished him over dozens of politicians of superior doctrinal purity. If he reverts back again – and he has, a bit – they remain with him yet. What matters is his aggression on behalf of the tribe. People crave the fellow-feeling, not the substance.

It is hard to establish a causal link between atomisation and political tribalism. As with other theories for the rise of partisanship, all we have to go on is historic correlation. The social fragmentation that Putnam documented took place between the mid-1970s and the millennium. America’s bipartisan politics broke down over more or less the same period, from the (relatively) cross-party ousting of Nixon to the hardened tribes of 1990s Washington.

Last week’s impeachment vote is the terminal point of at least three decades of my-party-right-or-wrong. Reversing this baleful trend will require a clearer understanding of why it emerged in the first place than any leading politician has demonstrated so far.

In a debate with fellow Democrats this month, Joe Biden showed his nostalgia for the collaborative Washington of his early career. Such sweetness of intent explains his national popularity, but it also leads him to underrate the problem at hand.

The former vice-president tends to imply that the old dealmaking culture faltered through a lack of goodwill among political elites or something equally fixable in short order. His rival Pete Buttigieg is another who sets huge store in conciliatory leadership as the way to a more unified America.

The deeper structural and even psychological forces behind partisanship, the possibility that elites are merely channelling an animus that already festers in the country – these are missed in the haze.

For millions, politics has become less a means to an end than a source of identity and belonging that used to come from other things. If this is right, then the US will not overcome partisanship by refining the manners of its political class. It will need to revive the associative life that used to provide citizens with those spiritual essentials. One of these tasks is easier than the other.

In 1974, Republicans could turn against one of their own because Republicanism was not the basis of their entire identity. That is true of fewer conservatives in 2019, and fewer liberals too.

The extent to which people now build their sense of self on their political affiliation is grim. But in the absence of other collectives in which to subsume themselves, it might also be entirely natural. The human impulse to associate takes whatever outlet it can find. – Copyright The Financial Times Limited 2019