US Politics: Trump could be better than high-minded idealists at containing Beijing 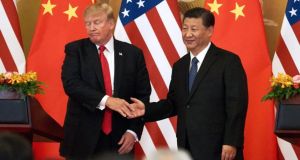 If only the United States was more bitterly divided along partisan lines. Oh, for some rancour in Washington.

The US has entered an open-ended feud against the world’s largest nation with less debate than it musters for the pettiest domestic affairs. Its two great parties diverge on the weapons of choice. They maul each other over the wisdom of tariffs and subsidies. On the basic rightness of the conflict, though, the lack of dissent will strike generations to come as eccentric (and, if things get out of hand, remiss).

By now, Europeans and other third parties to the superpower tussle know that the US will not soften its line under a new president. What they tend to underrate is the chance that it will actually harden. For all his militant jingoism, President Donald Trump views China in practical terms. The more power, security and wealth that it accrues, the less he believes there is for the US. It is an impoverished idea of foreign relations but it is at least transactional.

As proof, the Chinese can and often do buy off some of his animus with material concessions. Trump’s quarrel is not a principled one with the essential nature of their government. In that sense, his cynicism, so unbecoming in other contexts, is a stabilising influence on this most fraught of relationships.

It is idealism that has the far messier potential. Republicans were given to it until the rout of the neo-conservatives. It is now the Democrats whose grievances with China go well beyond economics to its civic and social model. One presidential contender, Bernie Sanders, views Beijing as part of an “authoritarian axis”.

The lesson of its awesome rise – fears another, Elizabeth Warren – is that “economic gains legitimise oppression”. As for Huawei’s role in Europe, to let it build 5G networks would be “to choose autocracy over democracy”, says Pelosi, with the Manichean crudeness that nothing – not even the fiasco of Iraq, which it helped to beget – can kill off in Washington. Light and dark, good and bad, free and unfree: this stuff still trips off the tongue.

The trouble is that it also widens the scope of the conflict beyond toy imports and intellectual property law. It implies that, in the absence of a round of glasnost, there is not much China can do to answer US concerns. Its very system is the problem.

The Democrats will not fret quite as much as Trump about the bilateral trade deficit, and for this nod to Ricardian logic we must be thankful. But they seem more likely to define the US against the Chinese way of life: to moralise what is for now a largely material conflict. No doubt, it will be meant well. But then no one “had better motives for all the trouble he caused” than Pyle, the erring innocent in Graham Greene’s novel The Quiet American.

An odd thought, I know, that a bellicose president, the one who began the US-China schism in the first place, might be better at containing it than his higher-minded successors. But the Cold War also metastasised beyond the plans of those (including the diplomat George Kennan) who never envisaged a worldwide clash of “values”.

Trump’s indifference to the domestic doings of China, Saudi Arabia and other governments has shown his narrowness of human sympathy. But it has also kept his squabbles with most of them to what is tangible and negotiable. It is not even as though he drives the hardest of bargains, as the North Koreans might testify between Cheshire Cat smiles.

Perhaps the Democrats’ more ideological noises will turn out to be so much electioneering. Neatly, their line on China allows them to match Trump for vigilance without forfeiting their distinctiveness. It is just that Washington’s vein of idealism is too persistent and too chequered in its record to be dismissed as easily as that.

A new president would need staff and these would come from a diplomatic firmament that hews to much of what the Democrats are saying. The same belief in America as an “idea”. The same wariness of China as the opposite of it. And the same affront that nations from Britain to the Philippines, without a market of $21 trillion to fall back on, do not see things with such piercing clarity. – Copyright The Financial Times Limited 2020