America is still waiting for a true populist 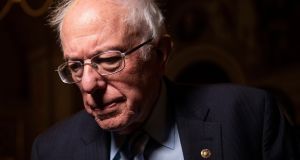 Senator Bernie Sanders: has undertaken “a journey” and is now the most liberal of the Democratic candidates for the White House. Photograph: Calla Kessler/The New York Times

The US border is “very porous”, said the 1940s-born New Yorker with the cult following, flyaway hair and occasional blind spot for foreign strongmen. Employers of “illegal immigrants” can count on “virtually non-existent” sanctions. A travesty, as low-wage competition is the “last thing we need”.

It takes an independent soul, an awkward fit in Democratic and Republican life, to venture such heresies against received opinion.

Before this gets out of hand, I will stipulate that Bernie Sanders, speaking in 2007, was not a nativist in the Donald Trump style. Familiar, though, was that willingness to pair leftist economics with a wariness of immigration: to see both subjects through a worker’s lens, not just one or the other. The Vermont senator reprised this full-spectrum populism in 2016, pinning Hillary Clinton’s loss to Trump on the liberal craze for race and gender over class.

I believe that “a journey” is the euphemism for what Sanders has undergone ever since. He is now the most liberal of the Democratic candidates for the White House. He favours a near-moratorium on deportations. Undocumented border-crossers would be civil rather than criminal offenders under his government. It is hard to know whether to mock the late-career turn or to salute its immediate profitability. No longer assailed from the liberal left, as he was by Clinton four years ago, he has a fine chance of the nomination.

If this were one man’s conversion, it need only detain us for so long, but it is also a parable for American politics.

In a vaunted age of populism, the US does not have a true populist. No politician of national clout stands for both the economic and cultural sides of the creed. Trump did, more or less, in his 2016 campaign but then – tariffs aside – governed as a Republican supply-sider. Sanders also came close to a balanced populism before softening on immigration. Each man intuited the blend of policies that Americans wanted and decided not to give it to them. The same could be said of much of the political class.

The marginal voter appears to crave universal healthcare and higher taxes on the rich, but also tighter borders and less strident identity politics. That “but” is a slander, of course, as no theoretical conflict exists here. It all adds up to a coherent belief in social cohesion under paternalist government. A European would recognise it as Christian Democracy or One Nation Toryism or even Gaullism, but it is just the politics of mid-20th century America, when immigration was low and the welfare state filled out.

The mystery is why politicians are so much better at sensing this demand than at meeting it.

A few serviceable excuses are available to them. No one faces the national electorate without first clinching their own party’s. A Democrat who gives no quarter to activist liberals, a Republican who bucks the tax-cutters, cannot survive the primaries. Even one who does then has to raise campaign funds in the most expensive political system in the democratic world. The wealthiest donors, after deep and impartial reflection on the subject, tend to be persuaded of the free market. A politician, even a sitting president, acts against their interests at some cost.

These and other snags get in the way of a more rounded populism. The prize is so vast, though, that at some point a politician with the required nimbleness will find a way through. Had the president expanded rather than trimmed Obamacare, renamed it Trumpcare and commissioned a glut of infrastructure, his re-election might not be such a touch-and-go affair. The first Democrat to pick a fight with campus leftism and echo yesteryear’s Sanders on immigration will mend the party’s estrangement from its old base. It would require no compromise whatsoever on Medicare expansion or wealth taxes.

Glory could await whichever party reconciles the two faces of populism. It should trouble Democrats that, for now, there are more stirrings in that direction on the right than on the left. Josh Hawley, the Missouri senator, is among the young Republicans who doubt the sanctity of the price mechanism as the organising basis of a society. They are only a decade or three late.

Theirs is not quite a Nixonian big government vision. It leans a lot on the usual pie-in-the-sky voluntarism. Still, they are inching towards the electoral sweet spot that other politicians have identified over the years and then conspired to avoid. When someone eventually goes there, the mix of policies will feel jarring, even improper, and then the most natural thing in the world. – Copyright The Financial Times Limited 2020