US politics: Range of presidential hopefuls is sign of party weakness – not strength 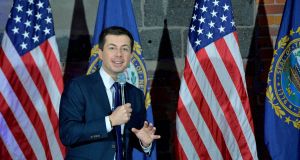 Democratic presidential candidate Pete Buttigieg: so far the most successful of the moderates. Photograph: Joseph Prezioso/AFP via Getty Images

Excuse the postmodernism here but the Iowa caucuses did not happen. The real prize of the event is less the delegates at stake than media fanfare and a sense of momentum. The delayed results allowed President Donald Trump to crowd these out on Tuesday with a trenchant State of the Union address. Contenders for the Democratic presidential nod had moved to New Hampshire even before all the numbers were in.

Still, Iowa was useful insofar as it put one idea to rest. There is no conspiratorial elite of political centrists. Or at least not a competent one. If liberals really were the knaves of socialist and conservative demonology, they would not allow their vote to splinter so inefficiently among duplicate candidates.

Former South Bend mayor Pete Buttigieg performed the best of them all. But Joe Biden still probably made the 15 per cent threshold, and has the promising terrain of South Carolina to come. Not far behind was Senator Amy Klobuchar, who remains – in that grim phrase, suggestive of hospital triage – “viable”. And none of this reckons with former New York mayor Michael Bloomberg. His advertisements saturate California and other states that will vote on March 3rd.

Even if we exclude Deval Patrick of Massachusetts, that makes four more or less credible candidates from the middle, lapping at the same finite pool of voters, donations, staff and media coverage. The left has but two, Bernie Sanders and Elizabeth Warren, the first of whom did so well in 2016 as to make it almost improper not to run again.

Those with moderate views often complain that there is no one to vote for any more. In the US, the problem is the opposite: a surplus of candidates. Of all the problems that dog the centre – a winning right, a confident left – the most underrated is its own fragmentation. This owes less to the egoism of politicians, each unwilling to stand aside, than to a free-for-all as to what constitutes moderation.

Because it was so imperious for so long, centrism did not have to define itself. It was whatever the government of the day was doing, whether led by Bill Clinton or Barack Obama in the US, Tony Blair or David Cameron in Britain, Romano Prodi or Matteo Renzi in Italy. Once it found itself in opposition, the centre had to set out what it believed from first principles. And there were no spoils of power with which to finesse any differences.

The process has been unexpectedly fractious. The basic faultline is between those who see little gravely wrong with the pre-2016 economy (Bloomberg) and those who think it too unequal (Klobuchar). Biden and Buttigieg are somewhere in between. There are other rifts, over criminal justice, over foreign policy, but they pale next to the distributional question of economics.

If the centre encompasses voters who could just about, with sterilised gloves on, back Trump, and others who could live with a President Bernie Sanders, it is no longer a useful concept. By the “centre”, we just mean a kind of political miscellany.

Nor is this theoretical incoherence unique to the American middle ground. For three years after the EU referendum, British liberals could not agree whether to hold a second one, rescind the first altogether or soften the terms of exit, and if so, how. Their more cohesive adversaries duly prevailed. Democratic moderates are inching towards a similar fate of death through schism. Their range of presidential hopefuls is a mark of weakness, not strength.

Conspiracist fans of Sanders read into Iowa’s delayed results obvious chicanery by the Democratic elite. Would that it were so feline. An establishment that cannot settle on a favoured candidate of its own, or even two, is unlikely to have the rest of the party on marionette strings.

If its problem were just a lack of guile, it might be fixable. But beneath that is genuine confusion over the meaning of moderation today. Is it closer to liberalism or to social democracy? Should it remember the welfare reform of 1996, say, with fondness or with a wince? Can it include a billionaire sometime Republican such as Bloomberg?

How telling that so far the most successful of the moderates, Buttigieg, majors on tone rather than specifics, and has the skimpiest record with which to define himself. With his constructive ambiguity, perhaps he will emerge as the prime centrist in the coming weeks.

More likely, that status will change hands in South Carolina at the end of February, and maybe again in March. And all the while, the energy of the left is concentrated into just two, and that of the Republicans just one. – Copyright The Financial Times Limited 2020