US president grants pardons to a who’s who of white-collar criminals from politics, sport and business

US president Donald Trump has commuted the sentence of Rod Blagojevich, the former Democratic governor of Illinois convicted of corruption for trying to sell former US president Barack Obama's vacated US Senate seat. Video: Reuters 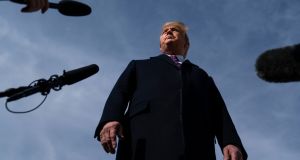 US president Donald Trump talks to reporters about his decision to pardon a number of white-collar criminals prior to boarding Air Force One on Tuesday. Photograph: Evan Vucci/AP

US president Donald Trump, citing what he said was advice from friends and business associates, granted clemency on Tuesday to a who’s who of white-collar criminals from politics, sports and business who were convicted on charges involving fraud, corruption and lies – including financier Michael Milken.

The president pardoned Milken, the so-called junk bond king of the 1980s, as well as former New York City police commissioner Bernard Kerik and Edward DeBartolo Jr, a former owner of the San Francisco 49ers. He also commuted the sentence of Rod Blagojevich, a former Democratic governor of Illinois.

Their political and finance schemes made them household names, and three received prison terms while DeBartolo paid a $1 million fine. Trump also pardoned David Safavian, the top federal procurement official under president George W Bush, who had been sentenced in 2009 to a year in prison for lying about his ties to lobbyist Jack Abramoff and obstructing the sprawling investigation into Abramoff’s efforts to win federal business. The president also granted clemency to six other people.

Trump has repeatedly stated his commitment to prison reform and addressing the excessive sentences given to minorities. At the urging of Kim Kardashian West in 2018, he pardoned Alice Marie Johnson, a 63-year-old African American woman serving a life sentence for a nonviolent drug conviction. Johnson was the centerpiece of a TV ad the Trump campaign ran this month during the Super Bowl.

But the president’s announcements on Tuesday were mostly aimed at wiping clean the slates of rich, powerful and well-connected white men. And they came after years of sophisticated public relations campaigns aimed at persuading Trump to exercise the authority given to him under the US constitution.

Patti Blagojevich, the wife of the former Illinois governor, frequently appeared on Fox News calling for Trump to commute her husband’s sentence. Kerik, a regular on Fox News, appeared on the network as recently as Monday night. Milken has sought to rebrand himself as a philanthropist in recent years as allies campaigned on his behalf for a pardon.

In conversations with his advisers, Trump has also raised the prospect of commuting the sentence of Roger Stone, his longtime adviser, who was convicted in November of seven felony charges, including tampering with a witness and lying under oath in order to obstruct a congressional inquiry into whether the Trump campaign conspired with Russia to influence the 2016 election.

Asked about a pardon for Stone on Tuesday, Trump insisted that “I haven’t given it any thought.”

New Jersey Democrat Rep Bill Pascrell Jr said in a statement that the president abused the pardon power by using it to reward friends and repair the reputations of convicted felons who did not deserve it. “The pardoning of these disgraced figures should be treated as another national scandal by a lawless executive,” he said.

But Trump on Tuesday defended his grants of clemency. The president was particularly critical of the 14-year prison sentence for Blagojevich, who was convicted of trying when he was governor of Illinois to essentially sell the Senate seat vacated by Barack Obama when he became president and once appeared on the reality series, The Celebrity Apprentice, which Trump hosted.

“That was a tremendously powerful, ridiculous sentence, in my opinion,” Trump said after announcing that Blagojevich would go free after serving eight years in prison. The president alleged that the former governor was a victim of the same forces that investigated him for years, citing James Comey, the former FBI director, and Patrick Fitzgerald, the US attorney in Chicago who prosecuted Blagojevich.

“It was a prosecution by the same people – Comey, Fitzpatrick, the same group,” Trump told reporters, misstating Fitzgerald’s name.

Trump gave no indication that he relied on the usual vetting process that guides presidents making use of their constitutional authority to wipe away criminal convictions or commute prison sentences.

Traditionally, the pardons office in the justice department would make recommendations about pardons and commutations to the deputy attorney general, who would weigh in and then pass the department’s final determinations to the White House. Instead, Trump told reporters that he followed “recommendations” in making his decisions.

In pardoning Kerik, who pleaded guilty to tax fraud and lying to the government, Trump said he heard from more than a dozen people, including Rudy Giuliani, the former New York mayor and Trump’s personal lawyer; Geraldo Rivera, a Fox TV personality; and Eddie Gallagher, a former Navy Seal and accused war criminal whose demotion was overturned by Trump last year.

Milken, whose dealings contributed to the collapse of the savings-and-loan industry, fought for decades to reverse his conviction for securities fraud. Richard LeFrak, a billionaire property magnate and long time friend, Sheldon Adelson, a prominent Republican donor, and Nelson Peltz, a billionaire investor who hosted a $10 million fundraiser for the president’s 2020 campaign last Saturday, were among those who suggested that the president pardon him.

Milken did not have a pardon or commutation applications pending at the justice department’s pardons office, meaning that Trump made that decision entirely without official department input. Two previous applications had been denied and closed.

Football greats Jerry Rice and Joe Montana – as well as the singer-songwriter Paul Anka – urged him to pardon DeBartolo, who pleaded guilty in 1998 to concealing an extortion attempt. DeBartolo avoided prison but was fined $1 million and suspended for a year by the National Football League. He later handed over the 49ers to his sister Denise DeBartolo York.

“You have to see the recommendations,” Trump said on Tuesday just before boarding Air Force One for a four-day trip to the west coast where he is scheduled to hold three campaign rallies. “I rely on recommendations.”

Previous presidents have often waited until the final moments of their presidency to wield the pardon power on behalf of their friends. Former president Bill Clinton pardoned Marc Rich, a hedge fund manager and financier who was convicted of tax evasion and other crimes, on January 20th, 2001, Clinton’s last day in office.

Others, including former presidents Bush and Obama, largely reserved their clemency authority for people convicted of nonviolent, low-level drug crimes and other offences who were identified as part of a rigorous process run by a team of government lawyers in the justice department.

Trump, however, has shrugged off those traditions and the controversy that sometimes comes with the use of the pardon power. He issued a “full and unconditional pardon” to Joseph M Arpaio, the Arizona sheriff and immigration hardliner convicted of contempt of court, in August of 2017.

Less than a year later, he did the same for I Lewis “Scooter” Libby Jr, a former aide to Bush who was convicted of obstructing justice and perjury.

In addition to helping erase the convictions of the well-connected and powerful, Trump on Tuesday also pardoned a tech executive who pleaded guilty to conspiracy, the owner of a construction company who underpaid his taxes and a woman convicted of stealing cars.

He also commuted the sentences of a woman convicted of drug distribution, another woman who was part of a marijuana smuggling ring, and a minority owner of a health care company who was sentenced to 35 years for a scheme to defraud the government.

Their relative anonymity was a sharp contrast to the prominence of the four men highlighted by the president. Milken, who was credited in the 1980s with using junk bonds to finance big debt-laden corporate buyouts, pleaded guilty to securities reporting violations and tax offences and the Securities and Exchange Commission banned him for life. The investigation came to highlight the corporate excesses on Wall Street in the 1980s.

In the years since his conviction, Milken has emerged as a major cancer philanthropist and is the founder of the Milken Institute, a nonpartisan think tank that holds a popular conference in Los Angeles, which convenes the world’s most powerful people in government, industry and finance.

Kerik, a police detective, served as Giuliani’s bodyguard and chauffeur during the 1993 New York mayoral race and later served in a series of high-ranking positions in the city’s Department of Correction. Eventually, Giuliani named Kerik correction commissioner in 1997 and police commissioner in 2000.

In 2004, his bid to become Homeland Security secretary in the Bush cabinet collapsed amid scandals. In June 2006, he pleaded guilty in the state supreme court in the Bronx to two misdemeanors tied to renovations done on his apartment. Four years later, Kerik pleaded guilty to tax fraud and making false statements.

DeBartolo presided over the golden era of the 49ers when the team won five Super Bowl championships under coach Bill Walsh with legendary players such as Steve Young, Ronnie Lott, Montana and Rice. He was elected to the Pro Football Hall of Fame in 2014 despite his conviction.

But in the late 1990s, DeBartolo was an investor in the Hollywood Casino Corp, a Dallas company seeking permission for a riverboat casino in Louisiana. On March 12th, 1997, he met Edwin Edwards, the influential former governor of Louisiana, for lunch in California and handed over $400,000 that Edwards had demanded for his help in securing a licence. The next day, the Gaming Board granted the licence. A month later, federal agents raided Edwards’s house and office, seizing the $400,000.

“Why do it? It actually was just plain stupidity, and I should have just walked away from it,” DeBartolo told NFL Films for a biographical documentary in 2012. “I was as much to blame because I was old enough to know better and too stupid to do anything about it.” – New York Times