Sanders could beat Trump – but is he worth the risk for Democrats?

US Politics: Parallels between capable socialist senator and Jeremy Corbyn do not ring true 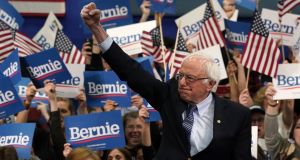 Astute chroniclers of British politics have formulated what is known as the Banter Heuristic. According to this rule of thumb, whose predictive record has few betters, the silliest outcome is also the likeliest to transpire. Here follows an account of its portents for the US in 2020.

Offered five or so candidates of weight, Democrats continue to dither over their presidential nominee. Vermont senator Bernie Sanders turns up to the party’s summer gathering with a clear but not quite decisive plurality of delegates, amassed in such primaries as New Hampshire’s on Tuesday. As grandees doubt an avowed socialist’s chances against president Donald Trump, the first “brokered” convention since 1952 crowns AN Other. The party is split and through that gap saunters Trump to a second term anyway.

The imponderable here is whether the elders are right about Sanders. To draw from Britain once more, tribal Democrats (the strategist James Carville) and Republican apostates (the writer David Frum) see in him the electoral hopelessness of Labour’s Jeremy Corbyn. If there is to be a counterargument, it must do better than the claim – true as it is – that “anything can happen” after 2016. A more substantial case for Sanders does exist.

To dispense with the obvious, he is a better politician than Corbyn: smarter, more fluent, less surprised that a bid for leadership of a nuclear state entails some press intrusion. Nor is he as culturally estranged from the non-graduate whites in deindustrialised towns who anchor (or used to) centre-left parties across the western world.

Last month, he was endorsed by Joe Rogan, the elk-eating podcaster whose heterodox views – a kind of un-woke social democracy – align with many a swing voter’s. Of late, Sanders has risked his standing among these people with some liberal noises in the culture wars. There is nothing to stop him tweaking his line once he secures the nomination, though. Romantic leftists are not forbidden some tactical chicanery.

The Corbyn parallel also breaks down at another point. It ignores the structural differences between the two countries. Whoever wins a UK election has the keys to the kingdom. To choose a radical is therefore a terrifyingly high-stakes move. In the US system, checked and balanced to a fault, voters can elect Sanders and count on the Republican Senate to thwart his designs. Even some of the Democrats in that chamber answer to overwhelmingly conservative voters.

Sanders would still have the foreign latitude of a commander-in-chief. This will be the gravamen of the Republican case against him. But his domestic programme will not survive the Bermuda Triangle of legislation known hereabouts as Capitol Hill. That his presidency is so likely to disappoint is what makes it plausible.

And none of this reckons with Trump’s ongoing desertion of populist economics. With its cuts to so much other than defence, his new budget enacts the guns-over-butter Republicanism that he seemed to retire in 2016. The central mystery of the Trump years is why someone who intuited the public’s exhaustion with this dogma revived it in government. Perhaps these were his instincts all along.

More likely, he is prevailed upon by ideologues who are wilier than he is. Either way, the implications for November are the same. A Democrat can be unprecedentedly left-wing and still alienate the marginal voter no more than, say, Republican plans for Medicare.

Just because Sanders can win does not mean that a party so monomaniacal about unseating Trump should take the chance. Former South Bend mayor Pete Buttigieg, Tuesday’s runner-up, is more saleable to the moderates who turned Democratic in 2018. Minnesota senator Amy Klobuchar has similar views and a pugilist’s edge, so essential against this president.

It is just that those of us who swore off political certitude after 2016 are amazed how much of it survives in the form of the Sanders bears. If he is the nominee, it would not be a Democratic forfeiture of the White House.

What it would be is a cultural moment. Thomas Jefferson and John Adams expressed their doubts in a grander register, but Sanders and Trump would be among the least religious contestants for the presidency. They tend not to even go in for the muddled spirituality of the confessional memoir and the damp-eyed stump speech.

With a combined age of 151, these men are a curiously future-facing pair, heralds of a nation that is, albeit in fits and starts, secularising. Theirs would make for an unusual showdown, and one whose outcome is not as foregone as lately billed. – Copyright The Financial Times Limited 2020