How Republicans came to deify the presidency

US Politics: Trump’s acquittal will reflect deference towards the office as well as partisanship 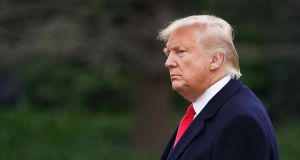 US president Donald Trump: Republicans who believe that Trump has a case to answer also know that he will turn his tweets, his voters and his donors on any who defy him. Photograph: Mandel Ngan/AFP via Getty Images

It was plain that Christian Bale is the actor of our times when he made constitutional jurisprudence sing on screen. As a fearsome Dick Cheney in Vice, he encounters, digests and then implements the “unitary executive theory”. This lavish construal of White House power, touted by right-wing lawyers in the 1970s, sidelines those bothersome checks and balances. It was the intellectual alibi for perhaps the mightiest vice-president in US history.

This week, as Donald Trump’s lawyers fend off impeachment charges, the film rewards second viewing. The likes of Alan Dershowitz have not majored, you will notice, on the facts of the Ukraine scandal. Only so much time is spent on whether the president sought Kiev’s help against his domestic opponents, on pain of withheld aid. Instead, the legal defence is that such behaviour lies well inside his remit anyway. The quid pro quo purportedly set out in a new book by John Bolton, the former national security adviser, is not damning, says Dershowitz, “even if true”.

When the Senate acquits Trump in the coming weeks, partisan fealty will be the main reason. That, and what Michael Gerson, the former speech writer to George W Bush, calls “understandable cowardice”. Republicans who believe that Trump has a case to answer also know that he will turn his tweets, his voters and his donors on any who defy him.

There is another motive at work, though, and it is as troubling as naked fear and my-party-right-or-wrong. Lots of Republicans sincerely believe in an all-powerful presidency, at least when one of their own occupies it. Their vote to acquit is the culmination of half a century of conservative thought in that direction. And for all the uniqueness of Trump, his special knack for reducing once-serious conservatives to jelly, this deference to executive power will not vanish when he goes.

After likening Franklin Roosevelt to a monarch, conservatives rather came to terms with presidential power. They cited the unique exigencies of a world hegemon. Richard Nixon assumed wide discretion to prosecute the Vietnam war. Ronald Reagan needed legal cover for secret operations in Central America. Under Bush, it was the war on terror that justified a new round of centralisation, with Cheney as the de facto if not de jure beneficiary.

Thus did the party of small government come to deify the White House. Thus did a party of constitutional originalists read sweeping powers into parsimonious text. It took a big-government liberal, Arthur Schlesinger, that fixture of Camelot, to deplore the “imperial” presidency.

In China, the US has a different challenger now, but the Republican answer – a free hand for the commander-in-chief – never changes. It is all the more urgent, they would say, in a world of rising autocracies. Some conservatives fear for America’s viability as a superpower if its leader has to act with less freedom than is enjoyed by Xi Jinping (or Vladimir Putin in Russia or Turkey’s Recep Tayyip Erdogan).

When liberals accuse the GOP of strongman-worship, they tend to mean a shallow and pathetic adulation, a schoolyard crush on the tough kid. If only. It is more thought through than that. It is a legal doctrine backed by a political analysis. At its core are misgivings about whether checks and balances, as presently constituted, are reconcilable with great-power status. This tension between limited government and national grandeur is innate to conservatism. John Locke does not always prevail over Thomas Hobbes.

A case in point is the Republican defence of this president. At times, it does not contest the facts so much as question all the fuss, as though there were something herbivorous and emasculating about constitutional niceties in a world governed by raw power. For all the focus on Trump, a President Mike Pompeo (now secretary of state) or a President Nikki Haley (the recent UN ambassador) could count on no less awesome latitude from Republicans.

The partisanship behind the coming acquittal is aired often. It is the main part of the story, no doubt, but it is also the domestic part. The global dimension of what is the first impeachment over foreign policy is sometimes missed. For 50 years, conservatives have wondered if the president is too trammelled to guard US interests in a brutal world.

It is not a frivolous concern. There are Europeans with similar qualms about the fragmented, consensualist EU in an age of unitary autocrats. Still, we are left to guess how Republicans will feel about an imperial presidency when it is Bernie Sanders or another Democrat atop the Augustan throne. – Copyright The Financial Times Limited 2020