Democrats move focus away from Mueller report with healthcare Bill 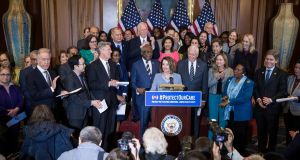 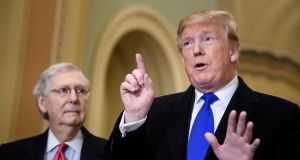 Mitch McConnell listens while US president Donald Trump speaks to reporters before a meeting with Senate Republicans on Capitol Hill on Tuesday. Photogrtaph: Brendan Smialowski/ AFP

House Democrats introduced a new Bill on healthcare on Tuesday in a sign that the party leadership is eager to pivot away from the Mueller investigation and focus instead on policy issues.

Two days after attorney general William Barr submitted his summary of the special counsel’s report on his 22-month probe to Congress, Democrats went on the offensive on healthcare, spurred by the Trump administration’s move to invalidate the Affordable Care Act.

The Department of Justice late on Monday asked a federal court in New Orleans to strike down the healthcare act, also known as Obamacare, citing a similar ruling made by a district court in Texas last year. It follows attempts last year by Republicans to “repeal and replace” Mr Obama’s signature healthcare policy, attempts that ultimately proved fruitless after they failed to get sufficient support in the Senate.

Democrats immediately seized on the move as proof of the Republican Party’s intention to strip healthcare coverage to individuals with pre-existing conditions – a key issue during the 2018 mid-term election campaign.

“Last night, the Department of Justice declared the entire law and all of its vital healthcare protections must go,” Senate minority leader Chuck Schumer said in the Senate. “Make no mistake about it, this is an escalation of the Trump administration and Republicans’ attacks on protections for people with pre-existing conditions.”

Millions of Americans have been given protections under Obamacare, and the thorny issue of healthcare policy has already featured in the early campaigns of Democratic presidential hopefuls including Kamala Harris and Kirsten Gillibrand. The Department of Justice’s request to invalidate the law was surprising, as the Trump administration had previously argued that only part of the Affordable Care Act should be dismantled.

Speaking on Tuesday, House speaker Nancy Pelosi hit out at Republicans as her party pledged to lower the cost of prescription drugs and safeguard the Affordable Care Act.

“The Republicans did say during the campaign that they weren’t there to undermine the pre-existing condition benefit, and here they are, right now, saying they’re going to strip the whole Affordable Care Act as the law of the land,” she said as Democrats introduced a Bill which included protections to safeguard those with pre-existing conditions.

As Democrats continued to debate their strategy following Mr Mueller’s findings that there was no collusion between the Trump campaign and Russia, president Donald Trump ramped up his attacks on the media and the intelligence agencies.

Speaking on his way into a lunch with congressional Republicans on Capitol Hill, Mr Trump accused Democrats of creating a “fraud on our country with this ridiculous witch hunt”, noting that the Mueller report had proven “no collusion, no obstruction, no nothing”.

“What happened is a disgrace. I think I don’t believe our country should allow this ever to happen again,” he said, claiming that the investigation was started “with instructions from high-up”.”

He also lashed out at the media in an early morning tweet: “The Mainstream Media is under fire and being scorned all over the World as being corrupt and FAKE. For two years they pushed the Russian Collusion Delusion when they always knew there was NO Collusion. They truly are the Enemy of the People and the Real Opposition Party!.”