Speculation grows that Theresa May will name date for resignation

UK Labour leader Jeremy Corbyn says that the House of Commons should consider putting any agreed Brexit deal to a public vote as Westminster votes to take control of Brexit away from Theresa May’s government. Video: UK Parliament TV 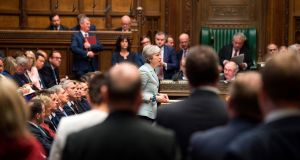 British prime minister Theresa May is going to address Conservative MPs at a meeting of the 1922 Committee on Wednesday night – with speculation swirling at Westminster that she could take the opportunity to name a date for her departure, in the hope of winning over more MPs to support her deal.

Mrs May still hopes to bring her Brexit deal back to parliament for a third meaningful vote this week, after leading sceptic Jacob Rees-Mogg, chairman of the European Research Group (ERG), said he was reluctantly considering supporting it.

“I addressed the ERG last night, as did some of my other fellow Tory MPs, and we basically said to them the time has come now to back the prime minister’s deal,” he said.

“The prime minister’s deal turns out to be the least worst option out of all the options which Parliament are now putting forward.

“We were very concerned about aspects of it but frankly it’s a dream compared to a full blown customs union, another referendum or a single market agreement with the European Union that doesn’t fulfil what our constituents voted for.

“I think when we debated this issue last night, it was six of one and half a dozen of the other when it came to the speakers, both for and against.

“There is definitely a palpable shift. It was a trickle, now it’s a flow. We Brexiteers are playing with fire, and we could get very, very burnt if this deal doesn’t get through.”

The prime minister’s spokesman said there had been a long discussion at cabinet on Tuesday morning about how to respond to parliament’s vote to seize control of the parliamentary timetable.

Fake News is being put out there. I am not turning, I have no intention of voting for the PMs deal. I do not want to see our great country tied to the EU idefinately. #NoDealIsBetterThanABadDeal

But he said the government’s focus remained on trying to find a majority for her deal.

“If we are able to hold and win a vote this week, we will be able to leave the EU in two months, which is what the PM firmly believes is the right thing.”

Asked whether Mrs May was hopeful she could yet win over her party, he said: “The prime minister and her colleagues understand the need to work hard on this in order to build support,” adding that ministers would continue to hold meetings with MPs from different parties.

Mr Rees-Mogg buoyed the hopes of some in government on Tuesday, as he indicated he could back Mrs May’s Brexit deal rather than risk Britain’s departure from the EU being delayed or abandoned.

But her Democratic Unionist unofficial coalition partners repeated that its MPs would not vote for her deal as it stood.

It also remains to be seen how many other Tory MPs in the pro-Brexit European Research Group (ERG) could follow the lead of Mr Rees-Mogg, who chairs it, with a number of them still insisting they could not support Mrs May.

‘Brexit is a process, not an event’

Speaking to the Conservative Home website for his regular “Moggcast” podcast, Mr Rees-Mogg said fellow ERG members had to recognise they did not have the Commons votes to deliver their version of Brexit, and should see departure as a gradual process.

“We have to recognise that what we want and what we can deliver is not necessarily the same because of our lack of numbers,” he said. “The ERG and other Eurosceptics in parliament cannot win any vote on our own.”

Mr Rees-Mogg said Mrs May had effectively ruled out a no-deal departure. “The prime minister will not deliver a no-deal Brexit,” he said. This meant, he argued, the options now appeared to be narrowing to being between her deal and potentially not leaving at all.

“And if the choice is the one that you suggest then, inevitably, leaving the European Union, even leaving it inadequately and having work to do afterwards is better than not leaving at all. And perhaps the thought processes that people like me hadn’t gone through before is the thought that Brexit is a process rather than an event.”

Many Brexiteers had viewed the process as being “March 29th, we leave, that’s it, bingo, done”, Mr Rees-Mogg added, and had to adjust their expectations. He said: “If we take this deal we are legally out of the European Union.”

However, a series of other ERG members remain resolutely opposed to backing Mrs May’s plan, with one, Andrea Jenkyns, tweeting that it was “fake news” to suggest she might change her mind.

Mrs May also needs the DUP’s 10 votes, which remains unlikely. On Tuesday, the DUP MP Jim Shannon insisted the party could not back the plan. “The obvious thing for us is that nothing has changed,” he told BBC Radio 4’s Today programme.

The only way for the DUP to support the plan, he said, was for the government to attach a time limit to the backstop insurance policy for the Irish border, which the EU has repeatedly ruled out.

“We had only one red line, and that red line was clear – the backstop. And that hasn’t changed,” Mr Shannon said.

A change of heart by the ERG would not affect this, he said: “They maybe see Brexit as the greater issue, rather than the union. We see the union as the big issue, the priority.”– Guardian