US president Donald Trump says claims that he has "complete and total exoneration" after US special counsel Robert Mueller concluded there was no collusion between the Trump campaign and Russia in 2016. Video: The White House 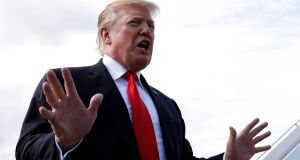 US president Donald Trump claimed “complete and total exoneration” after US special counsel Robert Mueller concluded there was no conspiracy between the president or members of his circle and Russia in its effort to manipulate the 2016 presidential election.

Mr Mueller stopped short of exonerating the president on obstruction of justice charges, according to a summary of his findings sent to Congress on Sunday by attorney general William Barr.

Reacting to the news as he left his Mar-a-Lago estate in Florida to return to Washington, Mr Trump said the report amounted to “complete and total exoneration”. “No collusion, no obstruction,” he said, describing Mr Mueller’s investigation as an “illegal takedown that failed”.

“It’s a shame that the country has had to go through this. It is a shame that your president has had to go through this . . . before I even got elected it began.” His sentiments were echoed by the White House press secretary Sarah Sanders, who noted that the findings of the Department of Justice were a “total and complete exoneration of the president of the United States. ”

The Department of Justice “determined not to make a traditional prosecutorial judgement.”

But Democrats on Capitol Hill struck a very different tone, calling for the full Mueller report to be released immediately. In a joint statement, House Speaker Nancy Pelosi and senate minority leader Chuck Schumer said the attorney general’s letter “raises as many questions as it answers”.

“The fact that the report does not exonerate the president on a charge as serious as obstruction of justice shows how urgent it is that the full report and underlying documentation be made public without any further delay,” they said, also pointing out that the president’s claim of complete exoneration “directly contradicts the words of Mr Mueller”.

They also hit out at Mr Barr, accusing him of bias against the Mueller investigation. “He is not a neutral observer and is not in a position to make objective determinations about the report,” they said, an apparent reference to Mr Barr’s claim last year in a memo to the Department of Justice that Mr Mueller’s obstruction inquiry was “fatally misconceived”.

Other senior Democrats also called for the full report to be released. Senator Chris Coons said the fact that Mr Mueller had not made a decision on obstruction of justice meant that “more than ever we have the responsibility to get access to those materials and conduct a full review”.

But Mr Trump’s allies in Congress and elsewhere responded jubilantly to Mr Barr’s letter’s findings. “The Russia investigation was based on false pretences, false intel, and false media reports,” said Devin Nunes, the former chair of the House Intelligence Committee, accusing Democrats of having “needlessly provoked a terrible, more than two-year-long crisis”.

In a four-page letter sent to Congress on Sunday summarising the findings of Mr Mueller’s 22-month investigation, Mr Barr said that the special counsel “did not find that that Trump campaign, or anyone associated with it, conspired or coordinated with the Russian government.”

Quoting directly from Mr Mueller’s report, which was submitted to the attorney general on Friday, he said the evidence “does not establish that the president was involved in an underlying crime related to Russian election interference”.

But on the issue of obstruction of justice, Mr Barr’s letter was more equivocal. It noted that, while Mr Mueller’s report does not conclude that the president committed a crime, “it also does not exonerate him”.

However, Mr Barr, together with his deputy Mr Rosenstein, concluded that “the evidence developed during the special counsel investigation is not sufficient to establish that the president committed an obstruction-of-justice offense”.