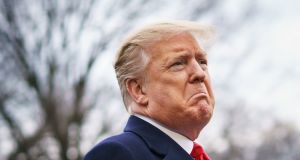 Donald Trump outside the White House on Friday. Among other investigations, authorities in multiple states are examining the Trump charitable foundation, which was dissolved last year. Photograph: Mandel Ngan/AFP/Getty Images

The wait is finally over. But the political fallout from the Mueller report has only begun. On Sunday attorney general William Barr submitted a letter to Congress outlining the contents of special counsel Robert Mueller’s investigation into Russian interference in the 2016 election.

It concludes that there was no collusion between the Trump campaign team and Russia. Quoting directly from Mueller’s report, Barr states that the evidence “does not establish that the president was involved in an underlying crime related to Russian election interference”.

On the issue of obstruction of justice, the outcome is more ambiguous, however. The Mueller report “does not conclude that the president committed a crime, it also does not exonerate him”, Barr’s letter states.

As a result, the attorney general, together with his deputy Rod Rosenstein, took a decision on the matter, concluding that that the evidence collected during Mueller’s investigation “is not sufficient to establish that the president committed an obstruction-of-justice offense”.

Republicans – many of whom had reacted with glee over the weekend to early reports that there would be no further indictments from the Mueller investigation following Mueller’s submission of the report to the attorney general on Friday – welcomed Barr’s letter.

It was a “bad day for those hoping the Mueller investigation would take President Trump down”, said Senator Lindsey Graham. “Now it is time to move on, govern the country and get ready to combat Russia and other foreign actors ahead of 2020.”

But Democrats were not so sure. While the findings of the report have backed-up President Donald Trump’s constant refrain of the past 22 months that there was “no collusion”, a question-mark still hangs over the question of obstruction of justice – the second strand of Mueller’s investigation.

The fact that Barr, together with Rosenstein, have made the conclusion that there was no obstruction of justice because they say there was no underlying crime, will be received with scepticism by many. After all, Barr already made his views clear on the investigation in a memo he wrote many months before he was nominated by Trump to replace Jeff Sessions as attorney general. In a memo sent to the justice department last year, he said that Mueller’s obstruction theory was “fatally misconceived” and based on a “novel and legally insupportable reading of the law”.

Democrats have already said the fallout from the report was unacceptable. Noting that Barr’s letter explicitly states that Robert Mueller’s report did not exonerate Trump, Jerry Nadler, the chair of the House judiciary committee, said: “We must hear from AG Barr about his decision-making and see all the underlying evidence for the American people to know all the facts.”

The coming days are likely to focus on whether the full Mueller report should be released to the public. Even before the publication of the Barr letter, Nadler and other Democrats had called on the full report – and even the underlying evidence used by Mueller to compile his report – to be provided.

“It’s so crucial that the entire report and the evidence underlying it be released to the public,” he said earlier on CNN. “Transparency is key here.” He also rejected the notion that the White House could invoke executive privilege to block the release of the full report, noting a 1974 supreme court ruling during the height of the Watergate scandal that ruled that President Richard Nixon could not resist a subpoena for tapes by citing executive privilege.

“As we learned from the Nixon tapes case, executive privilege cannot be used to hide wrongdoing,” Nadler said, adding that his committee would use their subpoena powers if needed to secure the report.

A protracted legal battle could be in the offing as congressional Democrats seek to secure access to the report. There have also been suggestions that Mueller himself could be called to testify before House committees.

While the Trump administration has breathed a collective sigh of relief at the findings of the Barr report, Trump’s legal troubles are far from over. While on the one hand Democrats have vowed to pick up where Mueller left off and continue their own congressional investigations into the president, Trump is also facing a range of state and federal cases arising from the Mueller investigation. These include the Southern District of New York’s investigation into the payment of “hush money” by the president to two women via his former lawyer Michael Cohen. Authorities are also examining the Trump charitable foundation and the president’s inaugural committee, which organised the presidential inauguration in January 2017.

Mueller may have finished his work, but the political fallout from the special counsel investigation will continue.