Why all US capitalists should vote Democrat in 2020

US Politics: Americans must embrace ‘socialism’ to ensure survival of capitalism 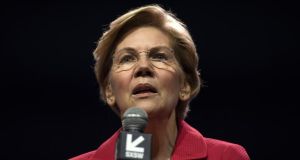 US senator Elizabeth Warren could be a nightmare for some on Wall Street. Photographer: Callaghan O’Hare/Bloomberg

In a country where “liberalism” means big government and “neoconservatism” implies utopian daring-do, the mangling of another abstract noun was probably due.

What US politics has done to “socialism” over recent months is no less regrettable for that.

Whether in the mouths of Democrats, who are warming to the word, or of Republicans, who still spit it out, it has come to mean something more familiar to a European as social (or Christian) democracy.

Fiscal transfers, universal healthcare, powerful trade unions: not only do these things not add up to socialism – Denmark is no command economy – a true stickler for that creed would actively oppose them as efforts to buy off the revolution.

They are not designed to replace the market so much as to stop the masses turning against it.

All of which provokes a counter-intuitive thought. Hardened capitalists should vote for a Democratic president in 2020 – even a fairly left-wing one – rather than a Republican.

The market system is under greater popular stress, after all, than at any time since the 1930s. One answer to the resentment is to give no quarter at all. A wiser one is to contain the anger by making pragmatic concessions to it.

Donald Trump won the presidency by taking the second approach but has governed, mystifyingly, with the first.

Having begun his White House campaign with a pledge to save not just Medicare (which serves the old) but Medicaid (which serves the poor), he has cut taxes and is now seeking welfare efficiencies to make up the budgetary shortfall.

After all his vaunted “disruption” of GOP orthodoxy, he seems set to run on a platform of colour-by-numbers Republicanism, at least in domestic affairs.

If this is the right’s plan to save the free-market system, then capitalists should take their chances with the left. There is a plausible future in which a more generous welfare state, funded by taxes on those who have been enriched by a decade’s asset inflation, drains some of the anti-capitalist pus from the body politic.

There is no plausible future in which another round of unreconstructed supply-side economics does the same.

One more presidential term of this stuff would be a tactical gain for free-marketeers, true, but what of the strategic risk?

For the short-term pleasure of lower marginal tax rates and thinned-out regulations, they risk the further disillusionment of an electorate that already worries about the fairness of the system. Millennial attitudes to capitalism should keep them up at night.

The transient nuisance of a “progressive” administration should not. The priority of capitalists is not the election of Republicans. It is the maintenance of public support for capitalism.

If this is best achieved through some redistribution and regulation, it would not be the first time.

As ever in politics, the trick is to distinguish between lesser and greater evils.

Consider the sulphurous unpopularity on Wall Street of Elizabeth Warren.

Even potential Democratic donors wonder what they will do if the Massachusetts senator becomes the party’s candidate in 2020. Her crime?

A taste for wealth taxes and financial regulation. It is natural for bankers to worry about these policies.

But they should also worry about the anger that will be stored up if some variation of her reform does not happen.

Warren is “a capitalist to my bones”.

She wants more, not less competition in the economy. If capitalists think that four or eight years of her leftish technocracy is the worst that can happen, they are not using their imaginations.

Better her than a more severe reckoning with public opinion down the line. Better a controlled explosion than a random, all-engulfing one.

Right now, the political debate concerns the excesses of capitalism. In no time at all, it will move on to the fundaments of the system itself.

The preservation of capitalism through its moderation: there is no paradox here.

Dwight Eisenhower understood it as basic statecraft, as did Richard Nixon and other Republicans who reconciled themselves to big government. Trump reached a similar intuition in 2016.

At least as far back as John Maynard Keynes, the truest friends of capitalism have understood that it cannot command an electoral majority in its purest form.

Franklin Roosevelt turned out to be a better custodian of the system than those who cried philosophical betrayal at first whiff of the New Deal.

He knew that an idea can die of purity. Too few now do.

There is more to the defence of free markets than the resistance of all reform as a red menace.

If Republicans have become dangerous to the cause, it is because they believe in it too much.– Copyright The Financial Times Limited 2019