Moscow rejects Mueller findings of political meddling in US

‘We consider accusations Russia interfered in the electoral process unfounded’ 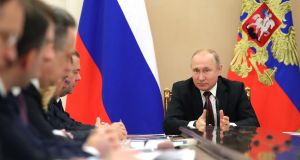 Russia’s president, Vladimir Putin: Donald Trump was criticised for being too soft on him after one-on-one talks in Helsinki in July 2018. Photograph: Mikhail Klimentyev/Sputnik

Russia was continuing to deny that it meddled in the 2016 US presidential election on Monday despite the findings of a US investigation to the contrary.

A summary of an investigation led by US special counsel Robert Mueller released on Sunday dismissed charges that Donald Trump conspired with the Kremlin during the election campaign to help him win the White House. However, the probe backed claims by US intelligence agencies that Russia had meddled to influence the outcome of the 2016 poll.

“As before, we consider accusations that Russia interfered in the electoral process in the USA to be unfounded,” Dmitry Peskov, Vladimir Putin’s spokesman, told reporters in Moscow on Monday. “You can’t find a black cat in a dark room, especially if there’s not one there,” he added, quoting the Chinese sage Confucius. “Centuries have gone by, but unfortunately an understanding of this has not yet made its way across the ocean.”

Back in 2016, the Kremlin hoped that Mr Trump, if elected, would push ahead with his campaign pledge to improve US-Russian relations, which had been severely strained by the Ukraine crisis. But Mr Trump, so the Kremlin narrative goes, has become hostage to Russophobes in the Washington political establishment raging against Russia’s “malign” activities – from election meddling, aggression against Ukraine, the Skripal poisoning and most recently propping up the corrupt Venezuelan regime.

Mr Trump met criticism for being too soft on Mr Putin after one-on-one talks with the Russian president in Helsinki last July and has since refused further meetings.

Speaking on Monday, Mr Peskov slammed a string of hostile moves by the US against Russia, including the imposition of trade sanctions, the withdrawal from a Soviet-era nuclear arms reduction treaty last year and the expulsion of Russian diplomats over the Skripal affair – the poisoning in the UK of ex-Russian spy Sergei Skripal and his daughter Yulia.

Mr Putin remained interested in having a good relationship with America, but following the Helsinki meeting the “ball was in the US court”, Mr Peskov said.

Russian lawmakers greeted the Mueller investigation’s findings in relation to Mr Trump but appeared resigned to continuing confrontation with Washington and an intensifying barrage of US sanctions.

“Here in Russia we have nothing to celebrate – the accusations against us remain . . . Yes there was no collusion but sanctions still need to be strengthened,” said Konstantin Kosachev, chairman of the foreign affairs committee in the Federation Council, the upper chamber of the Russian parliament.

Mr Mueller had found no proof that Mr Trump conspired with Moscow, but the Democrats in Washington would continue “to shout that there was collusion”, said Alexei Puskhov, a senator in the Federation Council. “The maniacal conspiracy theory doesn’t need facts.”

Vyacheslav Nikonov, a Russian parliamentarian representing the pro-Kremlin United Russia party, said Mr Mueller’s findings might save Mr Trump from impeachment, but the US president had “won a fight not a war”. There would be no halt to the US “Congress’s confrontation with Trump and with Russia”, he said.

Dmitri Trenin, director of the Carnegie Moscow Centre, said Russia would not become less toxic in the US, following the Mueller investigation. “Critics won’t take no for an answer and will double down with more sanctions,” he wrote on Twitter. “Also the election meddling charge still stands.”