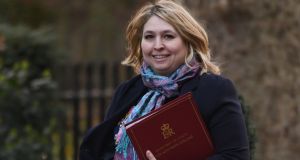 The powers of the Northern Ireland secretary Karen Bradley, have been expanded since the assembly was suspended. File photograph: Stefan Rousseau/PA Wire

The head of the senior civil servants’ union has called for direct rule to be imposed in Northern Ireland in the event of a no-deal Brexit.

Dave Penman, general secretary of the FDA said public sector employees in the province could not be expected to make increasingly political decisions with major security and economic implications if the UK crashed out of Europe.

His words follow Theresa May’s comments on Monday, when she told the House of Commons that “some direct application of powers” might have to be imposed on Northern Ireland in a no-deal scenario.

Mr Penman, whose members include dozens of permanent secretaries across Whitehall and Belfast, said: “The prime minister has confirmed what should have been patently obvious to any politician in Northern Ireland. A no-deal Brexit will require decision-making of such magnitude that only an elected politician should be responsible.

“In the absence of a functioning government in Belfast, ministers in Westminster will need to intervene if the UK crashes out of the EU with no-deal. Civil servants, who have been left without political direction for more than two years now, could not and should not be expected take decisions with such profound economic and security implications.”

After the suspension of Stormont more than two years ago, senior civil servants in the region say they fear they are being asked to make decisions that were once made by members of the assembly.

In the event of a no-deal Brexit, this could mean taking decisions about the border that could endanger fellow officials, police and border guards, informed sources have told the Guardian.

Responding to a question about whether direct rule would be needed under a no-deal scenario, Mrs May said: “If there is no Stormont government, if powers are needed and ministerial direction is needed which is not available to civil servants currently, it would require some direct application of powers here from Westminster.”

Stormont’s current stalemate began in January 2017, when the power-sharing partnership of the Democratic Unionist party (DUP) and Sinn Féin fell apart. The final row between them was over a botched green energy scheme, the renewable heat incentive.

Many direct powers have returned to Westminster since the suspension of the assembly, including giving Karen Bradley, the Northern Ireland secretary, the power to appoint an attorney general and powers to appoint the heads of local quangos.

Ministers and civil servants in the region have privately conceded that there are concerns about the reaction from Sinn Féin, the SDLP and dissident paramilitaries were direct rule officially announced.