Mueller found no evidence of Trump campaign colluding with Russia, US AG says 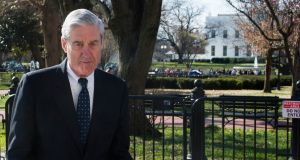 Special counsel Robert Mueller has concluded that there was no collusion between the Trump campaign team and Russia in the 2016 presidential election, US attorney general William Barr has said in a letter to Congress.

The four-page letter sent to senior congressional figures on Sunday afternoon says that Mr Mueller’s report, which was submitted to the department of justice on Friday, found no collusion.

“The special counsel did not find that the Trump campaign, or anyone associated with it, conspired or co-ordinated with the Russian government,” the letter states.

“The evidence ‘does not establish that the president was involved in an underlying crime related to Russian election interference’,” the letter says, quoting directly from Mr Mueller’s report.

The findings come after a 22-month investigation by Mr Mueller into Russian interference in the 2016 election and possible obstruction of justice by president Donald Trump.

The letter states that the special counsel’s decision to describe the facts of his obstruction investigation without reaching any legal conclusions “leaves it to the attorney general to determine whether the conduct described in the report constitutes a crime”.

The Department of Justice “determined not to make a traditional prosecutorial judgement.”

Mr Barr writes that, together with deputy attorney general Rod Rosenstein, he has concluded that “the evidence developed during the special counsel investigation is not sufficient to establish that the president committed an obstruction-of-justice offence”.

Following the release of the letter, US president Donald Trump tweeted that he had been completely exonerated by Mr Mueller of collusion or obstruction of justice.

“It’s a shame that our country had to go through this,” Mr Trump later told reporters before boarding Air Force One to return to Washington from Florida. “This was an illegal takedown that failed. And hopefully, somebody’s going to be looking at the other side.”

However, Jerry Nadler, the head of the judiciary committee in the House of Representatives, noted that the special counsel “clearly and explicitly is not exonerating the president.

“We must hear from AG Barr about his decision-making and see all the underlying evidence for the American people to know all the facts.”

Mr Nadler said he will be calling Mr Barr to testify “in light of the very concerning discrepancies” in the attorney general’s summary of the report.

But Republicans said the letter exonerated the president. Senator Lindsey Graham said it was a “bad day for those hoping the Mueller investigation would take president Trump down . . . Now it is time to move on, govern the country, and get ready to combat Russia and other foreign actors ahead of 2020.”

A senior department of justice official said she did not know how long it would take Mr Barr to decide which portions of Mr Mueller’s report to make public.

White House spokeswoman Sarah Sanders said on Sunday the findings were a “total and complete exoneration of the president of the United States”.

US House of Representatives speaker Nancy Pelosi and Senate Democratic leader Chuck Schumer said that the full report should be made public.

“The fact that special counsel Mueller’s report does not exonerate the president on a charge as serious as obstruction of justice demonstrates how urgent it is that the full report and underlying documentation be made public without any further delay,” Ms Pelosi and Mr Schumer said in a joint statement. Additional reporting: – Reuters/PA

1 No time limits and no pre-booking: what the unpublished pub reopening guidelines reveal
2 Anger in Beirut over missed warnings about ammonium nitrate at port
3 Teenage boy dies at Powerscourt Waterfall in Co Wicklow
4 Gardaí surrender 13 people to Polish police
5 Covid-19 may spread more easily in schools than thought, US report warns
Real news has value SUBSCRIBE