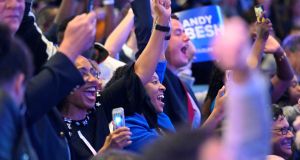 As America passed the one-year mark until the presidential election, there was mixed news for Democrats this week.

On Tuesday, several states held local and statewide elections. The results were a warning to Republicans as Democrats made inroads into traditionally Republican areas.

In Kentucky, a Democrat was on course to win the gubernatorial race, despite a last-minute appearance by Donald Trump to campaign for the incumbent Republican governor. More worryingly for the GOP, the Democrats’ advance into traditionally Republican suburbs in last year’s midterm elections was replicated in suburban areas of Kentucky, Pennsylvania and Virginia.

From Richmond to Lexington to parts of Philadelphia, districts that have historically tended to lean Republican voted Democrat, suggesting that a swathe of moderate Republicans are unhappy with the direction of the party under Trump.

But unsettling news for Democrats also made headlines this week. A New York Times-Siena College poll found that, while Trump remains historically unpopular nationally, he remains highly competitive in the key swing states that could determine the outcome of the election.

Trump won the 2016 election by a very small number of votes in a clutch of swing states including Ohio, Wisconsin, Michigan and Pennsylvania. The new polling found that he has retained and even grown support in six of the closest races last time round.

There was some good news for Joe Biden, who has been on the back foot in the Democratic primary as Elizabeth Warren and Indiana mayor Pete Buttigieg have dominated headlines. The poll showed that the former vice-president was the only Democratic candidate who could beat Trump in Pennsylvania, Wisconsin, Florida and other competitive states.

Though this is still within the margin of error, the Biden team lost no time in capitalising on the findings, targeting supporters with a “breaking news” text message. “A New York Times poll says that Joe Biden is the ONLY candidate who can beat Trump in some critical swing states that Trump won in 2016, So if Joe Biden isn’t our nominee, Trump will be re-elected again,” it read.

Overall, however, the survey is sobering news for Democrats, who are facing the prospect that Trump could again lose the popular vote, but win the electoral college.

But the Democratic National Committee (DNC) – the governing body for the US Democratic Party – counters that it is aware of the challenges.

From its campaign headquarters in Washington DC, the organisation argues that it has learned the lessons of 2016.

The DNC’s David Bergstein says that Trump’s approval ratings – even in key swing states – are historically low for a president at this stage in the presidency. But he says that Democrats are taking nothing for granted.

“We know that Trump is facing incredible headwinds but we also know that these races are going to be tight,” he says. As a result, the DNC is pouring resources into eight key battleground states, states that tend to be overlooked by the Democratic presidential candidates who are busy focusing on early-voting primary states like Iowa, New Hampshire and South Carolina. He said the aim of the strategy is “to allow the eventual nominee to scale and ramp up quickly”.

“The DNC is not waiting for the primaries to end to start building the general election infrastructure,” he says. “The DNC and other Democratic groups are stepping in and laying the infrastructure and making investments in the states that will ultimately determine the path to 270 electoral votes.”

This strategy has seen the party hire dozens of paid campaigners, many of whom are multilingual, in states like Florida, Ohio, Arizona, and Wisconsin – states where Democrats feel they have a chance in 2020.

A particular focus is the Latino vote. The Hispanic community has long been seen as untapped potential for Democrats. Latinos accounted for 12.8 per cent of eligible voters in the United States in 2018. While many live in states like California and Florida, the DNC believes that they are an important constituency in critical midwestern states.

Michigan, a state of 10 million people that Trump won by just over 10,000 votes, for example, has an estimated 80,000 eligible unregistered Latino voters that are likely to vote Democrat, the DNC estimates.

As Democrats prepare the ground game for the election, they are poised to fight for every vote. Given that Donald Trump won the 2016 election by fewer than 80,000 votes across three battleground states, the prospect of the election coming down to thin margins in a handful of states is very likely.