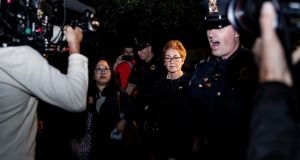 Marie Yovanovitch, the former ambassador to Ukraine: how and why she was recalled from her job has become a question at the heart at the impeachment investigation. Photograph: Anna Moneymaker/The New York Times

The US House of Representatives took a major step in the impeachment inquiry into President Donald Trump this week, holding its first full vote on the process.

Though Thursday’s vote was not to impeach the president – rather it was a direction for House committees to continue their inquiry as well as setting out the rules governing the process – it was highly significant.

Firstly, it paved the way for televised public hearings, which could happen this month. Critically it was also the first time the 435-seat chamber had to publicly take a stance on whether it supports the impeachment inquiry.

The vote fell broadly on party lines – every Republican opposed the motion setting out the parameters for the next stage of the inquiry, while all but two of the Democrats backed it – highlighting the bitter divisions in Congress as an impeachment trial looms.

The vote took place against a background of a rapidly accelerating inquiry. Since the investigation was announced in September by House speaker Nancy Pelosi, House committees have heard from dozens of witnesses, who have added fresh details to allegations that Trump improperly requested the Ukrainian government to investigate political rival Joe Biden.

Thursday’s vote means it is virtually certain that Democrats will ultimately vote to impeach Trump, though Pelosi has said that no decision has been made on this. A trial would then take place in the Senate, but with a two-thirds majority needed there to convict the president, and Republicans in the majority, Trump is unlikely to be convicted.

As the impeachment inquiry approaches its sixth week, these are some of the key witnesses who have so far appeared behind closed doors as part of the inquiry, and could be summoned by House intelligence committee chairman Adam Schiff to testify publicly as the process enters a new phase.

The first witness to testify, Volker was US special envoy to Ukraine during the period when Trump pressured its president, Volodymyr Zelenskiy, to investigate Joe Biden. Volker turned over text messages that are a key source of interest to investigators. A former ambassador to Nato, he resigned from his Ukraine role shortly after his appearance and also from his job at the helm of the McCain institute.

A career diplomat, Yovanovitch was ambassador to Ukraine until she was recalled early by the Trump administration. She testified that she was told by deputy secretary of state John Sullivan that she had done nothing wrong, but needed to get on “the next plane” home. She believed Trump’s personal lawyer Rudy Giuliani was part of a smear campaign against her.

Taylor, who had previously been ambassador to Ukraine between 2006 and 2009, was appointed charge d’affaires in Ukraine after Yovanovitch’s departure. His text messages to the US ambassador to the EU, Gordon Sondland. were among those disclosed by Volker and showed Taylor’s concern about US efforts to encourage Ukraine to investigate Biden and the business activities in Ukraine of his son, Hunter. His testimony has been one of the most damning to date, recounting how various administration officials pushed Ukraine to pursue investigations sought by the White House in exchange for aid.

The hotel magnate, who donated $1 million to the Trump campaign in 2016, was appointed US ambassador to the EU by the president in 2018. He played a central role in US policy towards Ukraine despite being ambassador in Brussels. Taylor told investigators that Sondland told him that “everything” was dependent on Ukraine investigating Burisma, the company that employed Hunter Biden while his father was vice president. But Sondland told the investigating committee during his own appearance that did not recall discussing Burisma or encouraging an investigation into the Bidens.

Lt Col Vindman, who was born in Ukraine but emigrated to the US when he was three, is an Iraq war veteran and Ukraine expert who serves on the National Security Council. He listened in on the July 25th phone call between Trump and Zelenskiy that’s at the heart of the impeachment inquiry, and immediately lodged a complaint. In his testimony this week he also describes a July 10th meeting when Sondland told Ukrainian officials that they should conduct the investigations sought by the White House in order to secure military aid. Vindman also said that former national security adviser John Bolton expressed concern about the White House’s stance on Ukraine. Both Bolton and Vindman’s twin brother, who works in the White House as a National Security Council lawyer, may ultimately testify.

The speaker of the House of Representatives opened the impeachment inquiry on September 24th after the White House published an edited version of the July 25th phone call between Trump and Zelenskiy. This represented an about-turn for the top Democrat, who was wary of impeachment having witnessed how Democrats, not Republicans, benefitted from the Clinton impeachment. Following complaints from Republicans about a secret process, Pelosi moved the process to a more public phase this week.

The Democratic congressman from California has been selected by Pelosi to be a key figure in the impeachment process. As chairman of the House intelligence committee he will oversee the first phase of the public hearings. A lawyer by training, Schiff (59) has been the target of Twitter attacks by Trump: “We don’t call him shifty Schiff for nothing,” the president said recently.