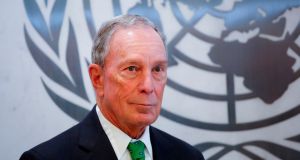 Michael Bloomberg, the former mayor of New York, is actively considering entering the US presidential race, potentially disrupting the contest to become the Democratic nominee for next year’s election.

The billionaire businessman earlier this year announced that he would not run for the Democratic nomination, but he was expected to register as a candidate on Friday in Alabama, a state with a deadline of November 8th for primary candidates to register.

The 77-year-old, who served three times as mayor of New York as a Republican, registered as a Democrat just before last year’s midterm elections. He has previously expressed interest in running for president, but this would be the first time he has registered as a candidate.

His entry into the race could pose a difficulty for former vice-president Joe Biden, who is running on a centrist platform. Mr Bloomberg also supports polices that are more moderate than left-leaning candidates such as Elizabeth Warren and Bernie Sanders.

Within minutes of reports that Mr Bloomberg was preparing to announce a run, Ms Warren issued a fundraising appeal to supporters.

“Let’s call Michael Bloomberg’s attempt to buy the presidency for what it is: Yet another example of the wealthy wanting our government and economy to only work for themselves,” the Massachusetts senator wrote in a campaign newsletter.

“When faced with the prospect of paying his fair share in taxes so that we can level the playing field for working families, Bloomberg has chosen to protect his wealth over everyone else – and that’s why he’d rather spend enormous amounts of money on a presidential run than pay taxes.”

Asked for his reaction to the news of a potential Bloomberg run, President Donald Trump dismissed the New York billionaire as “little Michael” and alleged that he has “personal problems”.

“He’s not going to do well but I think he’s going to hurt Biden actually,” he said as he left the White House for a campaign event in Georgia. “There’s nobody I’d rather run against than little Michael.”

“He doesn’t have the magic to do well,” he added. “Little Michael will fail.”

If he enters the race, Mr Bloomberg, the founder of the eponymous media and financial data company, comes with a formidable cash pile. He is estimated to be worth more than $50 billion, according to Forbes.

He is also a prominent voice on gun control, and has given money to several political campaigns. His gun-control group most recently spent $2.5 million in Virginia’s state elections, which took place this week.

He indicated in an interview earlier this year that he could reconsider his position and enter the race for the Democratic nomination if Mr Biden is deemed to be underperforming.

With a year to go to the presidential election, the Democratic field is beginning to narrow. Four candidates have solidified double-digit support in early voting states like Iowa and New Hampshire, according to the latest polls.

However, a New York Times–Siena College poll earlier this week found that Mr Biden is best placed to defeat President Donald Trump in key swing states that helped flip the presidency for Mr Trump in 2016 such as Wisconsin and Pennsylvania.

But his performance so far in the Democratic debates has failed to ignite widespread public support behind his candidacy.

In particular, Mr Biden, who is campaigning in New Hampshire this weekend, is struggling in early voting primary states.