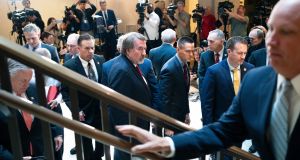 As always with Donald Trump, an insight into what is preoccupying the US president can be gleaned from his tweets.

On his way to a rally in Pittsburgh this week, he tweeted: “The Never Trumper Republicans, though on respirators with not many left, are in certain ways worse and more dangerous for our Country than the Do Nothing Democrats. Watch out for them, they are human scum!”

The president’s ire towards members of his own party who are not Trump loyalists – so-called Never Trumpers – is indicative of a growing unease within the White House about the level of Republican support as the president’s impeachment woes deepen.

Trump summoned members of the House Freedom Caucus, a group of strongly conservative Republicans in Congress, to a meeting in the White House on Tuesday.

The group evidently got the message. On Wednesday, several Republican members of Congress stormed an impeachment inquiry hearing, delaying the testimony of deputy assistant secretary of defence for Russia, Laura Cooper, by five hours.

In dramatic scenes on Capitol Hill, the two dozen Congress members pushed pass Capitol police to enter the secured room where the depositions were taking place, some bringing in their mobile phones in defiance of rules. Throughout the standoff, various members of the group held impromptu press conferences.

Their stated grievance was that the impeachment inquiry was being conducted in secret. They called for public hearings, or for a full vote on the impeachment of the president to be taken in the House of Representatives, arguing the public were hearing a biased version of what was taking place in the deposition rooms via the media and the accounts of Democrats.

The protest took place a day after acting ambassador to Ukraine Bill Taylor delivered the most damning testimony to date in the impeachment inquiry, in which he alleged that Trump and his officials communicated to the Ukrainian government that $391 million in promised aid was contingent on the government opening investigations into Joe Biden and alleged interference in the 2016 US election.

But despite this display of solidarity from Trump loyalists, there are signs that the Republican firewall of support may not be rock solid.

“The picture coming out of it based on the reporting that we’ve seen is . . . I would say not a good one,” he said.

By midweek, few Republicans were defending Trump on the substance of the impeachment inquiry – that he improperly asked the Ukrainian government to investigate a political rival and suggested that military aid was contingent on this as part of a quid pro quo.

Instead, they were trying to focus on process, culminating in a resolution brought forward by Senators Lindsey Graham and Mitch McConnell condemning the inquiry, and calling the process “illegitimate”.

Ominously for Trump, Republican senator Susan Collins of Maine declined to comment after Taylor’s testimony, noting that, as a member of the Senate, she may ultimately have to be a juror in an impeachment trial.

“I am very likely to be a juror so to make a predetermined decision on whether or not to convict a president of the United States does not fulfil one’s constitutional responsibilities,” she said, a worrying reality check for the president that he is very likely going to face impeachment.

As Republicans struggle to coalesce around a coherent response to the impeachment proceedings, one reason for their differing stances is their home constituencies. Many of the 30 or so protesting Republicans on Wednesday come from solidly, pro-Trump Republican seats; the more cautious members such as Susan Collins represent more moderate areas where local constituents may not be so sympathetic to Trump.

A Quinnipiac poll this week showed public support for impeachment growing to 55 per cent, the highest level to date – a worrying trend for Republicans.

Even within the West Wing, relatively few administration officials have taken to the airwaves to defend Trump.

It may be why acting chief of staff Mick Mulvaney’s job may be safe, for now. Despite a less-than-satisfactory press conference last week in which he admitted that a quid pro quo had been sought by the president from Ukraine, he has been one of the few senior figures to directly bat for Trump on impeachment. As the president strives to garner Republican support in the weeks ahead, he is going to need all the friends he can get.

1 Nphet signals strong opposition to parts of Government plan to exit lockdown
2 Helen McEntee defends role in appointment of Séamus Woulfe amid Dáil questions
3 400 – yes, 400! – Irish retailers for all your online Christmas shopping
4 Ireland could lose out as France lays claim to most of €5bn Brexit compensation fund
5 Q&A: What restrictions are going to be lifted next week?
Real news has value SUBSCRIBE