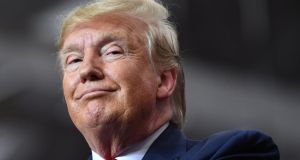 The anonymous author of a new book on Donald Trump’s White House says the US president lurches from crisis to crisis “like a 12-year-old in an air traffic control tower”, according to cutting extracts published by the Washington Post.

The author, who also wrote an article for the New York Times last year headlined “I am part of the resistance inside the Trump administration”, claims senior officials considered resigning as a group last year, in a “midnight self-massacre”, but ultimately decided such an act would do more harm than good.

The book describes Trump’s approach to the presidency as “like a 12-year-old in an air traffic control tower, pushing the buttons of government indiscriminately, indifferent to the planes skidding across the runway and the flights frantically diverting away from the airport”.

The writer also says that the president’s impulsive tweets could leave senior officials “waking up in the morning ‘in a full-blown panic’”.

“It’s like showing up at the nursing home at daybreak to find your elderly uncle running pantsless across the courtyard and cursing loudly about the cafeteria food, as worried attendants tried to catch him,” the author writes, according to the Washington Post.

“You’re stunned, amused, and embarrassed all at the same time. Only your uncle probably wouldn’t do it every single day, his words aren’t broadcast to the public, and he doesn’t have to lead the US government once he puts his pants on.”

A Warning, which is due out on November 19th, also describes racist and misogynist behind-the-scenes statements by Trump and says he “stumbles, slurs, gets confused, is easily irritated, and has trouble synthesising information”. It reports that the president comments on people’s weight or appearance, and at one point describes him putting on a Hispanic accent during an Oval Office meeting about migrants crossing the border from Mexico.

In one alleged incident, Trump said: “We get these women coming in with like seven children. They are saying, ‘Oh, please help! My husband left me!’ They are useless. They don’t do anything for our country. At least if they came in with a husband we could put him in the fields to pick corn or something.”

The White House press secretary, Stephanie Grisham, dismissed the book. “The coward who wrote this book didn’t put their name on it because it is nothing but lies,” she said, adding that the media should “cover the book as what it is – a work of fiction”.

The Washington Post said the author opted to remain anonymous in order not to distract from the president and the larger issues. “I have decided to publish this anonymously because this debate is not about me,” the official writes. “It is about us. It is about how we want the presidency to reflect our country, and that is where the discussion should center. Some will call this ‘cowardice’. My feelings are not hurt by the accusation. Nor am I unprepared to attach my name to criticism of President Trump. I may do so, in due course.”

On Monday the US justice department sent a letter to the book’s publisher and the writer’s literary agency, raising questions over whether any confidentiality agreement had been violated and asking for information that could help reveal the author’s identity.

The publisher, Hachette Book Group, responded by saying it would provide no additional information beyond calling the author a “current or former senior official”.

The author’s New York Times article alleged that numerous people in the US government were resisting Trump’s “misguided impulses”. According to the Washington Post, the author now writes: “Unelected bureaucrats and cabinet appointees were never going to steer Donald Trump the right direction in the long run, or refine his malignant management style. He is who he is.” – AP, Guardian