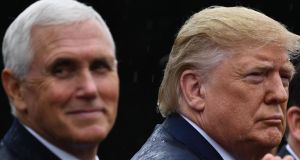 The impeachment inquiry that was announced barely 10 days ago, has proceeded with lightning speed as Democrats weigh-up whether to impeach President Donald Trump.

On Thursday, the first witness to testify was questioned behind closed doors by Democrats, as former special representative to Ukraine Kurt Volker appeared before congressional committees.

Several more are expected to appear in the coming weeks, including former US ambassador to Ukraine Marie Yovanovitch who was recalled to Washington early by the Trump administration.

As Washington gears up for potentially its third-ever impeachment trial, Trump is in typically combative mood. He spent most of the week excoriating the media, House Intelligence chairman Adam Schiff and the whistleblower who raised concerns about his July 25th phonecall with Volodymyr Zelenskiy.

But while Trump has indicated he will not go down without a fight, the impeachment inquiry has also threatened to drag in other senior figures in the Trump administration.

Mike Pence’s role has emerged as a topic of interest in recent days. The Washington Post reported that Trump involved the vice-president in his efforts to pressure Ukraine’s leaders. Pence was instructed by Trump not to attend the inauguration of Zelenksiy in May, even though he was scheduled to attend.

Further, Pence met Zelenskiy in Warsaw on September 1st just ahead of his visit to Britain and Ireland, a meeting that Trump had been expected to attend but cancelled at the last minute.

At issue is whether Pence pressed Zelenskiy to investigate former vice-president Joe Biden during this conversation. His aides say he raised corruption issues but it is unclear whether he made specific reference to allegations against Biden, or if the Ukrainian president interpreted any reference to corruption as a reference to Biden, given Trump’s phone call of July 25th.

A problem for Pence is that, while he was not on the July 25th call, his national security aide was, and a briefing note was most likely given to him after the call, or at the very least included in his briefing documents ahead of the Poland trip.

Pence made his first public comments on the controversy on Thursday. While he did not address the question of whether he asked the Ukrainians to investigate the Bidens, he did say that voters had the “right to know if the vice-president of the United States or his family profited from his position as vice-president during the last administration”.

Secretary of state Mike Pompeo is also under scrutiny. He confirmed this week during a trip to Rome that he listened in to the July 25th phone call with the Ukrainian president. Though he has declined to speak at length on the Ukraine controversy, he fired off an indignant letter to the heads of three congressional committees this week, accusing them of intimidating former and current state department employees, and resisting calls for officials to testify.

This week the state department’s inspector general summoned congressional leaders to a classified meeting which involved the official passing on clippings and documents alleging misconduct by Joe Biden that originated with Giuliani.

How much Pompeo, and the state department, knew about Trump’s efforts to find incriminating information about a political rival will be one of the questions pursued by Democrats.

Another key figure in the ongoing controversy is attorney-general William Barr. Trump said during the July 25th phone call that Barr would phone Zelenskiy, though the justice department quickly issued a statement stating that Barr had no knowledge of Trump’s call.

Another facet of the controversy is that the justice department, which is headed by Barr, advised the director of national intelligence not to pass the original whistleblower complaint to Congress, a decision criticised by Democrats, who argue that he was legally bound to do so.

This week it also emerged that Barr travelled to Italy during the summer to seek information from Italian intelligence agencies about the origins of the investigation into Russian interference in the 2016 US presidential election.

With Democrats threatening to subpoena the White House for documents, these key figures will play a key role in the development of the impeachment inquiry.