Death of Isis leader is a much-needed win for Trump 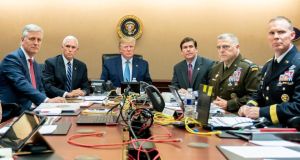 US president Donald Trump (centre), US vice president Mike Pence (second from left), US secretary of defense Mark Esper (third from right), along with members of the national security team, watch as US Special Operations forces close in on ISIS leader Abu Bakr al-Baghdadi, from the Situation Room of the White House on Saturday. Photograph: Shealah Craighead/The White House/Handout/Reuters

US president Donald Trump touted a foreign policy win on Sunday, as he announced that Abu Bakr al-Baghdadi had been killed in a raid on Saturday in northern Syria.

The death of the man who founded Islamic State, overseeing the transformation of the terrorist group into a deadly and barbaric force that controlled large swathes of Iraq and Syria at the height of its power and carried out terrorist attacks in Europe, is a positive development for Mr Trump.

It comes at an opportune time for the president, who had been weathering widespread criticism from foreign policy experts and members of his own party about his decision to withdraw US troops from northeast Syria earlier this month, paving the way for Turkey’s incursion into the area.

While Saturday’s raid on a compound in the Idlib province had many of the hallmarks of the 2011 capture and killing of al-Qaeda leader Osama bin Laden during the Obama administration, Mr Trump imbued the events of the last 48 hours with much of his signature drama.

The president teed-up the event in a mysterious tweet on Saturday night as most people in Washington were busy watching their home baseball team play in the World Series. “Something very big has just happened!” he tweeted, with the White House confirming just before midnight that a press conference had been scheduled for 9am the next day.

As Mr Trump confirmed the news of the al-Baghdadi capture in his press conference, he departed from the usual conventions of presidential announcements, describing in vivid and sometimes gruesome detail, the circumstances of the al Baghdadi capture.

While the killing of al-Baghdadi does not close the chapter on Islamic State in the Middle East, the development was undoubtedly welcome news for the president

Several times, he said that the Isis commander had died “like a dog”, “whimpering and crying”. Unusually for a statement of this kind he took questions, giving more details of the raid than are usually proffered on an issue as sensitive as this.

The lengthy press conference also contained some familiar Trumpisms. The US president boasted that while Baghdadi had been on the run for many years long before he took office, “under my direction as commander in chief we obliterated his caliphate 100 per cent in March of this year.” He said he had watched the operation from the Situation Room with vice president Mike Pence and others “as though you were watching a movie.”

A photograph resonant of the famous shot of former president Barack Obama, then secretary of state Hillary Clinton and others watching the bin Laden raid was later released by the White House.

Within minutes of the announcement, Middle East experts warned that the removal of al Baghdadi did not mean the end of Islamic State, noting the persistence of Al Qaeda despite the death of bin Laden.

The fact that al Baghdadi was located in an area of north western Syria which is the home of a new al-Qaeda affiliate could also be a worrying sign of some form of alliance between Isis and al-Qaeda groups in the region.

But while the killing of al-Baghdadi does not close the chapter on Islamic State in the Middle East, the development was undoubtedly welcome news for the president.

Politically, it is likely to quell the firestorm of criticism he received from members of his own party following his abrupt decision to withdraw US troops from Syria following a phone call with Turkish president Racep Tayyip Erdogan earlier this month, effectively abandoning America’s Kurdish allies in the region.

Significantly, South Carolina senator Lindsey Graham – a Trump ally who berated the president for the Syria withdrawal – was present in the Diplomatic Room of the White House as the president delivered his address, and was informed of the attack on Saturday evening.

His presence did not go unnoticed by congressional Democrats, who questioned why the Senate Judiciary chairman was informed and not more senior congressional figures including House Speaker Nancy Pelosi.

In a statement welcoming the announcement, Ms Pelosi noted that the Russians had been given advance notice of the operation before the Congressional leadership.

Other Democrats questioned the decision not to brief the so-called “gang of eight”, a bipartisan group of senior House and Senate members that are typically briefed on highly-secure intelligence matters.

Nonetheless Mr Trump’s focus is likely to be purely on his own party. With the president in serious need of Republican support as an impeachment trial looms, this military and intelligence victory is a domestic political boon.

Whether it guarantees the long-term future of Islamic State remains to be seen.