A letter and a photo: White House power dynamics play out in public

America letter: Trump diplomacy revealed in letter to Erdogan, after accusing Pelosi of being ‘third-rate’ politician 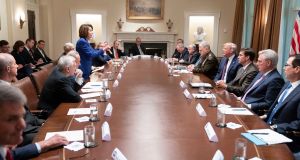 It started with a letter; it ended with a picture.

This week the world was given an insight into the diplomacy of Donald Trump when a letter he penned to Turkish president Recep Tayyip Erdogan entered the public domain.

Fox Business first reported the existence of the letter. The White House swiftly confirmed its authenticity.

“Dear Mr President, Let’s work out a deal!” it begins. It concludes with the warning that history “will look upon you forever as the devil if good things don’t happen. Don’t be a tough guy. Don’t be a fool! I will call you later.” Trump’s distinctive swirling signature completes the letter written on headed White House paper.

Written three days after Trump ordered US troops to withdraw from Syria, paving the way for the Turkish invasion, it was proof to the US president’s many critics of his tenuous grasp of foreign policy.

Pelosi promptly made the photograph her Twitter profile picture. Within hours she was welcomed with raucous applause

“Are we ready yet to have a full national conversation about the diseased mental state of the president of the United States?” tweeted George Conway, husband of Trump adviser Kellyanne Conway and a frequent critic of the president.

Within an hour the rapidly changing news agenda had switched to a meeting unfolding in the White House. Democrats had walked out of a meeting with the president and national security advisers on Syria. Senate minority leader Chuck Schumer said that Trump had called House of Representatives speaker Nancy Pelosi a “third-rate” politician.

The top Republican in the House, Kevin McCarthy, had a different reading of the meeting, telling reporters that Pelosi had “stormed out” of the room, describing her behaviour as “unbecoming”. Trump issued his own version of what happened in the room.

“Nervous Nancy’s unhinged meltdown!” he tweeted, posting a photograph of the House speaker standing up and pointing to the president surrounded by a room full of men.

For Trump it was proof of the “unhinged” leader, for most of the country, it was a perfect visual encapsulation of a political leader at the top of her game confronting a flailing president.

Pelosi promptly made the photograph her Twitter profile picture. Within hours she was welcomed with raucous applause at an event at the International Labor Union, blocks from the White House, where she presented congressman Richard Neal with a distinguished leadership award from Irish-American Democrats.

Reminiscent of the 2018 photograph of German chancellor Angela Merkel dominating a room full of male leaders, including a petulant Trump, at the G7 meeting in Canada, the Pelosi photograph captures the power dynamics at play in Washington where the House speaker is holding the executive branch to account by pressing forward with an impeachment inquiry.

That inquiry is proceeding apace, with several witnesses testifying before House committees this week, including the US’s ambassador to the European Union, Gordon Sondland. The process received a blow, however, with the untimely death on Thursday of Elijah Cummings, the charismatic Baltimore congressman who chaired the House oversight committee – a key committee in the impeachment inquiry.

Cummings, who had issued subpoenas to several senior administration figures, was a towering presence in the US Congress. The son of sharecroppers, he was assailed by Trump earlier this year for doing “a very poor job” representing his constituents in Baltimore, which the president described as a “disgusting, rat and rodent infested mess”.

But Cummings was widely respected. As one of the most senior African-Americans in Congress he halted a hearing last year to leap to the defence of Republican Mark Meadows, a hardline conservative, who was accused of racism, telling the surprised people in the room that Meadows was one of his best friends.

At the close of Michael Cohen’s testimony in February, when Trump’s former lawyer spilled the beans on his erstwhile boss, Cummings gave a memorable closing speech.

As the room fell quiet, he had words of advice for others. “When we’re dancing with the angels, the question we’ll be asked: In 2019, what did we do to make sure we kept our democracy intact? Did we stand on the sidelines and say nothing?”

Powerful words from a man whose legacy will continue to be felt for many years.