Bernie Sanders: ‘I get a little tired of Democrats afraid of big ideas’

Democratic presidential candidate Bernie Sanders hits out at his fellow candidates during a live TV debate, saying he is "tired of Democrats afraid of big ideas." Video: CNN 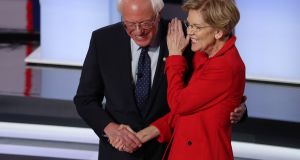 It has hosted music stars from Elvis Presley to Frank Sinatra, from Stevie Wonder to Diana Ross.

But on Tuesday night the historic Fox Theatre in downtown Detroit became the venue for the opening night of the second set of Democratic debates. Ten candidates were chosen to participate in the first of two debate nights. From the get-go attention was on Elizabeth Warren and Bernie Sanders, the two top-polling candidates among the first group.

They did not disappoint.

As had been intimated by both senators ahead of the debate, they did not take each other on. Instead the two-and-a-half hour debate became in many ways a battle between the Sanders-Warren liberal wing of the party and the remaining eight candidates, who in one way or another confronted the party elders on their policy stances.

The most contentious issue of the night was healthcare, which dominated the first 45 minutes. Both Sanders and Warren defended their policy of “Medicare for all” – a single-payer system of healthcare that many believe is too far left for most of the American public to support. Others outlined their support for a public system that would allow consumers to keep their private health insurance – a priority for many Americans, according to polls.

The pair also defended their support for climate change policies such as the “Green New Deal”, an ambitious infrastructure plan designed to mitigate climate change. After fellow candidates John Delaney and John Hickenlooper attacked Sanders and Warren supporting an idea they described as unrealistic – Delaney accusing Warren of making “fairytale” promises – Sanders shot back: “I get a little tired of Democrats afraid of big ideas.”

On many of the other issues, the 10 candidates were broadly in agreement. A discussion on immigration saw most criticise President Donald Trump’s border policy; on gun violence, most advocated for stronger gun control and background checks, although Bernie Sanders came in for criticism for his past stance on gun ownership, which has seen the Vermont senator vote against national background checks. Virtually all candidates promised to withdraw US troops from Afghanistan if elected.

The recent racial tensions that have been stoked by Trump were also a topic of debate among the all-white candidate line-up.

Former Texan congressman Beto O’Rourke said he would sign a new voting rights act if he was elected president, while Marianne Williamson said she supported reparations for the descendants of slaves – an increasingly controversial issue. The self-help author’s suggestion elicited one of the biggest cheers of the night. Amy Klobuchar, a senator from Minnesota who is running on a centrist platform, said it was important to note that not all Trump supporters were racist, though she said the president’s recent comments about Baltimore and members of Congress could not be tolerated.

On trade, many of the Democrats in the debate criticised the current system, with many echoing Donald Trump’s policy. The US president was “on to something when he talked about China”, said Tim Ryan from Ohio, a member of the House of Representatives.

Elizabeth Warren also outlined her opposition to the current global trading system, arguing that trade deals had become “a way for giant multinationals to change the regulatory environment so that they can suck more profits out for themselves and leave the American people behind”.

“Elizabeth is absolutely right,” Bernie Sanders said, adding that he was the only member of Congress to vote against the original Nafta trade agreement between the United States, Canada and Mexico.

Overall the debate yielded few surprises. None of the candidates had a standout moment, and moderates such as O’Rourke and Klobuchar are likely to be disappointed that they did not make up much ground. In a sign of the relative blandness of the evening, self-help guru Williamson, who is polling at less than 1 per cent, was one of the hits of the night. She was the top-searched topic on Google in 49 out of the 50 US states during the debate.

As with the previous debate in Miami, Wednesday’s debate is likely to be the more exciting of the two.

A rematch between Senator Kamala Harris and former vice president Joe Biden is on the cards after a clash between the two became the defining moment of last month’s debates.

For many candidates this will be the last opportunity to make their mark on the national stage. Eligibility requirements for the third debate in Houston in September are much tighter, when the line-up will be reduced to as few as 10.

Meanwhile, the millions of Democratic viewers tuning in to the debates this week will be hoping that this week brings the party closer to choosing the best candidate to take on Donald Trump next year.