Alastair Campbell says he no longer wants to be Labour member 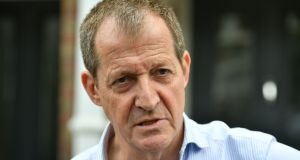 Alastair Campbell: “With some sadness but absolute certainty, I have reached the conclusion that I no longer wish to stay in the party.” Photograph: Dominic Lipinski/PA

Alastair Campbell, the former Downing Street director of communications under British prime minister Tony Blair, has said he no longer wishes to be a Labour Party member, warning that Jeremy Corbyn is poised to lose the next election against Boris Johnson and destroy the party “as a political force capable of winning power”.

Mr Campbell had planned to fight his expulsion from Labour for revealing that he voted Liberal Democrat in the European elections, but he has now written to Mr Corbyn informing him: “With some sadness but absolute certainty, I have reached the conclusion that I no longer wish to stay in the party, even if I should be successful in my appeal or legal challenge.”

The former Labour adviser and campaigner for a “people’s vote” has written a lengthy missive to Mr Corbyn, part-published in the Guardian and in full in the New European, setting out his view that the party will not win a majority against Mr Johnson, who he says is “embarked on a crash and burn strategy” designed to win a mandate for hard Brexit at the ballot box.

“The culture you have helped to create has made the party one that I feel no longer truly represents my values, or the hopes I have for Britain,” Mr Campbell wrote. “I see no strategy in place that remotely meets the electoral or policy challenges ahead. On the contrary, in so far as I ascertain a strategy at all, it is one that looks more designed to lose. I fear the country may already have decided that it does not intend to make you prime minister.”

Mr Campbell has been appealing against his expulsion since he was ejected under an automatic process designed to deal with those expressing support for another party. It caused mixed reactions at the time, with Charles Clarke, a former home secretary, revealing that he too had opted for the Lib Dems in the European elections because of their pro-Remain policy, and Tom Watson, the deputy Labour leader, saying the move to kick out Mr Campbell was “spiteful”.

Others within Labour described the decision to expel Mr Campbell as merely a matter of applying party rules consistently, while Momentum, the grassroots group of Corbyn supporters, celebrated his departure saying that “being kicked out of the party is the least he deserves” for his role in Mr Blair’s government and the Iraq war.

In his letter, Mr Campbell said a member of Mr Corbyn’s team had more recently suggested there could be two possible routes to him being let back into the party, one of which was a suspension of his auto-exclusion during a review of the party’s whole disciplinary system, and the other some kind of public commitment to voting Labour at the next election.

However, he said he felt unable to give a commitment to voting Labour while his concern about Mr Corbyn’s stance on Brexit was “still acute”.

“I do not know at this stage how I will vote at the next election and I have made this decision after discussing it with nobody apart from family and a small number of close personal friends,” he said, adding that this was not part of some bigger plan but a deeply personal decision.

“What I do know is that this is indeed a moment of real peril,” he wrote. “To have any chance of stopping Johnson and stopping a hard Brexit, you need to step up now, and signal leadership of the anti-Brexit, anti-populist cause, though it may be that loss of trust in your approach to Brexit means it is too late to win back many former supporters.”

Mr Corbyn said at the weekend he was “raring to go” and ready for an election against Mr Johnson, which could come as early as this autumn if the EU is not open to changing the withdrawal agreement and parliament blocks a no-deal Brexit.

Labour has changed its policy to call for a second referendum on any deal and to avoid no-deal, but some Labour MPs are still pushing for a more unequivocally pro-Remain position in all circumstances to head off the threat of the resurgent Lib Dems and win over anti-Brexit swing voters.

Since Mr Johnson came to power, his government has enjoyed a modest boost in the polls, with some putting the Conservatives neck-and-neck with Labour and others putting the Tories ahead.

Labour had no comment on Mr Campbell’s letter. It comes after Peter Mandelson, another former Labour strategist under Mr Blair, gave an interview over the weekend calling for a new party leader, although he said he would not leave the party. – Guardian