Afghan candidate made his will, then survived a car bomb 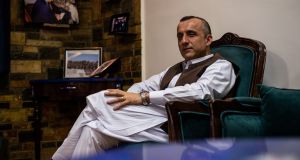 Amrullah Saleh, who is running for vice-president of Afghanistan, at his home in Kabul on Monday. Photograph: Jim Huylebroek/The New York Times

Even before he received specific intelligence about an attempt planned on his life, Amrullah Saleh had a feeling they were coming for him soon. So he wrote his will. As a former Afghan intelligence chief who is staunchly anti-Taliban, he had been near the top of the militants’ list for a long time. But now there was an added reason for targeting him: He was about to launch his campaign as the running mate of President Ashraf Ghani in his September re-election bid.

About a week ago, Saleh took a new look at the four-page will. He added instructions for his wife and five children on how to handle news of his death and how to gain access to his savings. Saleh said he was convinced that “I wasn’t going to survive this time.”

The attack he dreaded came on Sunday, the first day of the presidential campaign, after he and Ghani had appeared at a tightly guarded rally in Kabul, Afghanistan’s capital. Soon after Saleh reached his political headquarters, he was greeted by an enormous car bomb. That was followed by a half-dozen suicide bombers climbing up to his fourth-floor office.

In the nearly seven hours of havoc that ensued, about 30 people were dead – 20 of them Saleh’s guests or colleagues who had spent years at his side. The candidate narrowly escaped after a 50-minute battle with the insurgents, engaging them from the building’s rooftop where weapons were kept.

“They had come to kill me at any price, and they did everything right,” Saleh said. “That I am alive is God’s help, God’s will and maybe a little help from my background. I am deeply shaken – my emotions, my humanity. But my determination to fight is strengthened. I have 20 more reasons to fight.”

Saleh (46) is a long-time survivor: of suicide attacks and ambushes, of years of political isolation, but also of a deeply deprived upbringing. As a child, he was orphaned and left destitute. His ascension to the highest levels of Afghan politics – he has allied with Ghani, whom he once staunchly criticised – comes in one the most difficult and uncertain periods of the Afghan war. Bodies are piling up on all sides, and a US search for a political settlement through negotiations is proving difficult.

The bloodshed has only furthered concerns about the repeatedly delayed vote. The Taliban control or threaten large swathes of the countryside. In the urban centres, Taliban militants, as well as members of the Islamic State, are waging suicide attacks.

Amid this heightened insecurity, candidates and voters alike are proceeding cautiously. On Monday, the second day of the campaign, none of the 18 candidates held a rally or public gathering, local media reported. It is not just the violence. There is also the problem of voter fatigue, with political crises resulting from the last two disputed votes adding to the toll of the war.

Some diplomats are concerned that a repeat of previous fraudulent elections could only weaken Afghanistan’s hand in negotiations with the Taliban. Ghani’s team, including Saleh, argue that only a government with a strong mandate through elections can negotiate with the Taliban.

Rangin Dadfar Spanta, who was Afghanistan’s national security adviser when Saleh served as spy chief, said his old colleague was a prime target because of his “radical position” against the Taliban and against the Pakistan intelligence agency, which is accused of supporting the Taliban.

“He has been a rarity in our security sector: a person with deep research and study, but also with experience both from his time in the anti-Taliban resistance and later as intelligence chief,” Spanta said. But many of his critics see his inflexible resistance to the Taliban as a hurdle at a time when the war can end only through compromise. And his denials of the extent of Taliban control once went so far that they stirred ridicule.

“Those who claim that terror groups controls nearly half of Afghanistan are invited to visit my office in Kabul & join us for a tour of the country by road, by plane, by bike, on horse and by foot,” Saleh tweeted in February, raising eyebrows amid the rising insecurity. “This falsehood and fake news is mostly spread by stooges, agents, and idiots.”

When the car bomb went off outside his Kabul office early Sunday evening, Saleh was meeting a commander from northern Baghlan province who had recently replaced his brother, who had been killed along with about two dozen of his fighters. The blast was so strong, blowing out windows and furniture alike, that the attackers were already making their way up the stairs towards his fourth-floor office as Saleh tried to make sense of what had happened.

He and his aides followed a regularly practiced emergency drill and headed for the roof and its weapons stash. Afghan special forces also arrived at the scene and joined the battle. Saleh’s surviving bodyguards secured the adjacent building and put a ladder in place so he could climb across to it. But the militants had already made it to his office and began shooting at the ladder from his small window. Saleh and the half-dozen colleagues with him managed to escape to the next building after the guards turned their fire on the office window and slid the ladder further away.

In the morning, the building was a scene of carnage. In the hallway of his office suite, a small picture of Saleh’s granddaughter lay under broken glass and dust. Inside his office, his yellow notepad was glued to the floor with the blood of one of his aides who had been shot dead there. On the window of the room next door were the shoes and hat of one of the visitors who had tried – and failed – to escape.

“We went to the office this morning and found Haseeb’s body under the armoured gate,” said Fahim Fetrat, cousin of one of Saleh’s bodyguards, named Haseeb. “We thought since he was too close to the car bomb there might not be anything left, but we found him.”

Saleh did not sleep all night, helping prepare for the burial of his colleagues, his friends said. The bodies went to cemeteries across Kabul, as well as provinces in the north and east. Some of Saleh’s closest guards have received months of training by the CIA in the United States. Three of them were buried in an overpopulated cemetery on a mountainside in the north of Kabul, their graves covered in fresh leaves.

Saleh said that when he arrived at a government hospital at 2am to visit the wounded and the dead, one of the relatives of a dead colleague was so angry that he slapped the candidate. “I pulled him in and said, ‘Hit me more,’” Saleh said. “He hit me again.”

Saleh asked his bodyguards to step back, he said, the man’s pain understandable: His loved one was gone, Saleh still alive. The candidate said he then asked the young man whether his death would have eased his pain, and the man said yes. “I pulled my handgun, loaded it and gave it to him,” Saleh said.

The young man hesitated, he said, and returned the gun. Another relative stepped forward, grabbed Saleh by the collar and hit him. “I told my guards they have no right to touch anyone who hits me here,” Saleh said. “They have every right to do so. We need to answer them for what is going on in this country.” – New York Times