Suspect, who lived in Switzerland, had no apparent motive for the attack 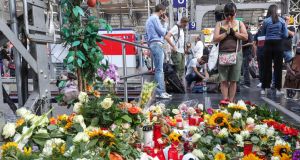 A woman pays tribute at the train station in Frankfurt where an eight-year-old boy died after being pushed in front of a train on Monday. Photograph: Armando BabanI/EPA

German authorities say the Eritrean man accused of pushing a mother and her eight-year-old son before an oncoming train in Frankfurt on Monday, killing the boy, was a “model” refugee residing in Switzerland.

But Zurich police said the man, who had no convictions for violent behaviour, had suffered psychological problems that had kept him off work since January.

Just before 10am on Monday the man, who had been lurking behind a pillar, pushed a 40-year-old woman and then her son onto the tracks at Frankfurt central station. The woman was able to roll out of the path of an oncoming train while the boy was killed instantly. A 78-year-old woman was also shoved by the man, but she fell before reaching the edge of the platform.

The chief suspect ran from the train station, was chased by an off-duty policeman, arrested and brought before a remand judge on Tuesday.

Police said on Tuesday the suspect has said nothing about the case so far and has no obvious connection to the victims. Neither have they any idea to date of a motive. Alcohol and drug tests produced negative results and he is now undergoing a psychological evaluation.

The mother of the dead boy suffered a nervous breakdown and has been hospitalised.

A day after the death on platform seven, shocked passengers gathered before a sea of flowers, candles, soft toys and pictures.

Elke Schneiderbanger was travelling on the train from Düsseldorf on Monday morning that killed the young boy.

“I heard the conductor shouting, ‘Oh God, he’s pushed him onto the train’,” she said. “People started to scream, collapsed on the platform and we knew immediately that something bad had happened.”

Last week a 34-year-old mother was killed in North Rhine-Westphalia when a German-born man with Serbian roots pushed her into the path of an oncoming train. The second such death in a week has sparked soul-searching in Germany about public safety, particularly in train stations.

The Frankfurt suspect was born in 1979, is married and has three children. He was granted refugee status in 2008 and had full-time employment.

“In a brochure from the firm where he works he was presented as a super integration case study,” said Horst Seehofer, Germany’s federal interior minister, who interrupted his holiday for a press conference on Tuesday.

Federal police said the man was not flagged in any databases and, as a recognised refugee, was in Germany legally. He was not checked at the border because Switzerland, though outside the EU, is an associate member of the Schengen free-travel area. The man had been sought by the Swiss police since an incident last week in which he threatened a neighbour with a knife, tried to strangle her and locked her in her apartment.

Close to tears in Berlin on Tuesday afternoon, Mr Seehofer said that, like millions of other Germans, he was “deeply shocked by the cold-blooded murder”. He announced a special body to examine boosting train station security.

“Although general criminality figures are dropping, the feeling of security among the population is very tense and cases like yesterday contribute to that,” he said, urging reporters at a press conference to “separate cleanly” crime and migration.

Instead he said Germany was facing a rise in public order offences generally – regardless of perpetrator origin – and promised extra police resources to tackle this.

Experts said it was difficult to predict what the motive in such attacks could be.

“It could be an extremely heightened disposition for violence or psychological problems, but I would be careful talking of a typical perpetrator profile,” said Prof Rudolf Egg, a criminal psychologist, to German television.