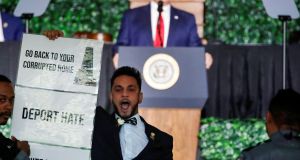 Democrat Ibraheem Samirah interrupts President Donald Trump as he speaks at an event in Jamestown, Virginia to mark the 400th anniversary of the founding of the colony by British settlers in 1619. Photograph: Carlos Barria/Reuters

A speech by the US president to mark the 400th anniversary of America’s first legislative assembly was boycotted by several black lawmakers on Tuesday, as the controversy over Donald Trump’s comments about African-American figures showed no sign of abating.

But the event was overshadowed by Mr Trump’s controversial comments on race in recent days, with several members of the state assembly in Virginia skipping the event. One member of the Virginia assembly who did attend, Democrat Ibraheem Samirah, interrupted his speech and was led out of the venue by police. In a statement, members of the Virginia Legislative Black Caucus (VLBC) said it was boycotting the event because of Mr Trump’s “repeated attacks on black legislators and comments about black communities”.

“The absence of the VLBC will send the message that the members do not condone the president’s participation . . . those who have chosen to attend and remain silent are complicit in the atrocities that he incites,” the statement said.

In his speech at the Jamestown Settlement Museum, Mr Trump praised the form of self-government that was established in Virginia centuries ago, noting that “it gave us the country we love”.

He also paid tribute to the contribution African Americans – most of whom descended from slaves who arrived from Africa into ports like Jamestown – to the formation of the United States.

“In the face of grave oppression and grave injustice, African Americans have built, strengthened, inspired, uplifted, protected, defended and sustained our nation from its very earliest days,” he said.

As he left Washington for Virginia Mr Trump remained defiant about his controversial remarks about Baltimore and its congressional representative Elijah Cummings, claiming that “many many” African Americans had phoned the White House to thank him.

“They really appreciate what I’m doing and they’ve let me know it,” the president said, adding that he is “the least racist person anywhere in the world”.

Mr Trump sparked controversy when he described Baltimore, a black-majority city, as “rat-infested” and a place that “no human being would want to live”, targeting in particular Mr Cummings, an African American congressman who represents the district.

After doubling-down on his comments, the US president also took aim at well-known civil rights figure Al Sharpton, describing him on Twitter as a “con man, a troublemaker, always looking for a score”, and someone who “Hates Whites & Cops”.

His attack followed a controversy over his comments about four women of colour who are members of congress earlier this month, when he told the members to “go back” to where they come from, even though all four are US citizens.

“President Trump is someone who calls it like he sees it,” he said, noting that unemployment was now at its lowest-ever levels for African Americans.