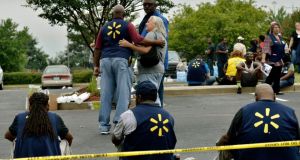 Walmart employees gather in a nearby parking lot after a shooting at the store, on July 30th, in Southaven, Mississippi, US. Photograph: Brandon Dill/AP

Two people were killed and a police officer was injured in a shooting at a Walmart in the US state of Mississippi early on Tuesday, authorities said.

Police responded around 6.30am to reports of a gunman at a Walmart in Southaven, Mississippi, on the border with Tennessee.

They arrived to a chaotic scene, with about 60 employees still inside the store and the gunman in the parking lot, Chief Macon Moore of the Southaven Police Department said at a news conference Tuesday morning.

“These people were doing the same thing that you and I do every day, showing up for work in an attempt to provide for their families, and then became victims of a senseless violent act,” he said.

The two victims were believed to be employees of the store, Sheriff Bill Rasco of DeSoto County told The Commercial Appeal. He said the gunman was a former employee. Mayor Darren Musselwhite of Southaven described the gunman as a “disgruntled employee” who had a “personal grievance”.

As authorities approached the gunman in the parking lot, a police officer was shot and injured, Moore said. The officer was at the hospital recovering. “He was saved by his vest,” he said. The suspect’s identity has not been released. He was shot twice by police and was in surgery late Tuesday morning, the chief said. The shooting shut down the Walmart store in Southaven, a city of about 55,000 in northern Mississippi, about 20km from Memphis, Tennessee.

Police cars and crime scene tape blocked off access to the store, where authorities said they had also responded to reports of a fire and a suspicious package.

“It’s still very fluid,” Mr Moore said. After the shooting, Walmart employees, some still in their uniforms, gathered in a circle outside the store and held hands in prayer, according to a local reporter at the scene.